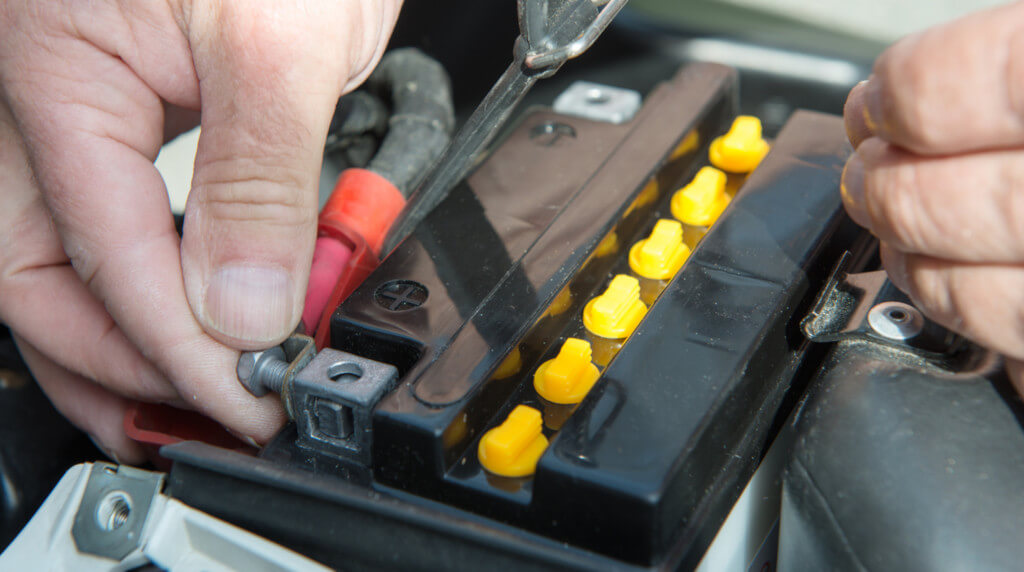 As bikers, we’re passionate folk. We love our rides and we love customizing them, maintaining them, or caring for them. Everyone’s passion occasionally results in a difference of opinion and one of the heated debates in the motorcycle world is batteries. One person will tell you this battery is best, another will tell you this one is, and yet another person will give you an entirely different answer as to which battery you should use for your bike.

One of the big debates is whether to use Lithium batteries or AGM batteries on your bike. What’s the difference and why does it matter? Let’s put these two against one another and lay out the myths then clear it up with some facts.

If you’re new to a lifelong passion of bikes, we’ll clear up some terms first.

AGM – AGM stands for Absorbed Glass Mat. An AGM motorcycle battery has the positive and negative plates separated by an absorbent glass mat that absorbs and holds the battery’s acid and prevents it from flowing freely inside the battery. The plates are tightly compressed into each cell and held under pressure in a plastic case. Unlike traditional Flooded/Wet batteries, there’s no need to frequently monitor and inspect an AGM battery, and they aren’t damaged by severe vibrations caused by extremely bumpy roads or conditions. AGM stores its electrolyte in a dry, or suspended state, transferred between the glass mat to where the battery needs it.

Lithium – Lithium motorcycle batteries are typically Lithium IRON batteries (not Lithium ION batteries—the ones that have been known to explode or catch fire) and are lighter than lead-acid based batteries. Energy is stored in Lithium ions instead of Lithium metal.

On the surface, AGM batteries are often considered the best for your motorcycle because of low self-discharge rates, sturdy construction, less risk of lead sulfate crystal build up, ability to function in lower temps and doesn’t have the same possibility of failure when deep-cycled.

However, AGM batteries require a specialized charger and can be easily damaged by improper charging practices.

Lithium ION and Lithium IRON are commonly used to power consumer electronics. Containing inorganic phosphates, Lithium batteries are currently the safest, most fire-resistant rechargeable battery. Discharge remains consistent until a Lithium battery is almost completely empty. But since the tech for them is still new that means they are expensive to manufacture and expensive to purchase. Also, there’s very little to indicate that a lithium battery is reaching the end of its functional shelf-date. It simply stops working altogether once past due for replacement.

Myth: Lithium Batteries will explode.
We’ve all heard the stories by now. A smartphone caught fire and exploded, a laptop smoking and in ruins. But note, these stories are always associated with small electronics. The Lithium batteries that go in your bike are constructed from a lithium-iron-phosphate blend that gives up little in power density for significant chemical stability that’s not found in traditional Lithium batteries used in small devices.
Myth: You can use a regular battery charger for your AGM.
No, you can’t. Many AGM battery chargers have microprocessors that will collect information from your battery and adjust the current and voltage, accordingly, safeguarding from charge flooding. Overcharging will kill your battery, whether it’s AGM or Lithium.
Myth: Lithium is unsuitable and won’t start my bike if it’s cold outside.
The truth is any battery in extremely cold temps will have difficulty starting in winter. Lead-acid, AGM, Lithium—all their performance will be affected by the cold.
Fact: Almost all Lithium battery failures occurred in batteries without the right Battery Management System.
A Battery Management System is a sophisticated charger with the built-in technology necessary to balance your discharge/recharge loads on a lithium motorcycle battery. A BMS will shift a battery down when accidental overcharge situations that lead to overheating or fires may occur. No matter what type of battery you use, always purchase a charger/BMS specifically indicated for use with your type of battery.
Fact: Lithium motorcycle batteries weigh significantly less than most lead-acid batteries.
This is completely true. On average a rider can get up to 70% in weight savings with a Lithium battery. If you’re racing your bike professionally or on the weekends, you want the weight savings. If you own a Big-Twin bagger, weight probably won’t mean as much.
Fact: AGM’s have a very low discharge rate.
You can store an AGM battery for extended periods. If not left in a completely discharged state for a large amount of time, they can quickly recharge to over 95% of their capacity.

Which has the highest capacity?

Average AGMs have 6 cells roughly 2 volts each, while lithium batteries have 4 cells at about 3 volts each. They’re both 12-volt batteries, but when you look closely at capacity, the number you really want is “amp-hours.” (AH)

AH, or ampere-hour is the amount of energy charged inside your battery that will allow one ampere of current to flow for one hour. It’s a unit of measurement for the rate of electron flow or current in an electrical conductor.

A lithium battery manufacturer usually derives their number from lead equivalency, called a PbEq and this number is what you need to pay attention to. A PbEq number of 20 for example, may only have up to six amp-hours of capacity, which turns out to be less than an AGM battery.

If you want to charge your cam, phone, GPS, Comm-System, and more, the number of PbEq’s will be important to avoid finding yourself stranded in the middle of nowhere with a dead Lithium battery.

Which is better: AGM or Lithium?

The definitive answer is complicated. Your budget and what you’re willing to spend on a battery will be the first thing to consider.

If money is an issue, AGM remains the most accessible to all budgets and that’s a pro if you just spent big on your dream ride and to properly gear up. To be honest, you should not buy a cheap battery for your bike no matter which you choose. The old saying of, “you get what you pay for,” often terribly comes true.

For the fastest charging and overall capacity in addition to lighter weight, and if the PbEq’s are correct and you’ve invested in the right Lithium battery charger, a Lithium battery is going to be your best bet. They tend to generally last longer, can be faster to charge, and have a longer lifespan—so long as you don’t cheap out on the charger.

These days, Lithium Iron batteries for motorcycles are stable with excellent internal circuitry, and charging tech has followed that lead with excellent BMS.

Ultimately it depends on you, but we highly recommend checking out Lithium-Iron batteries and considering the switch.