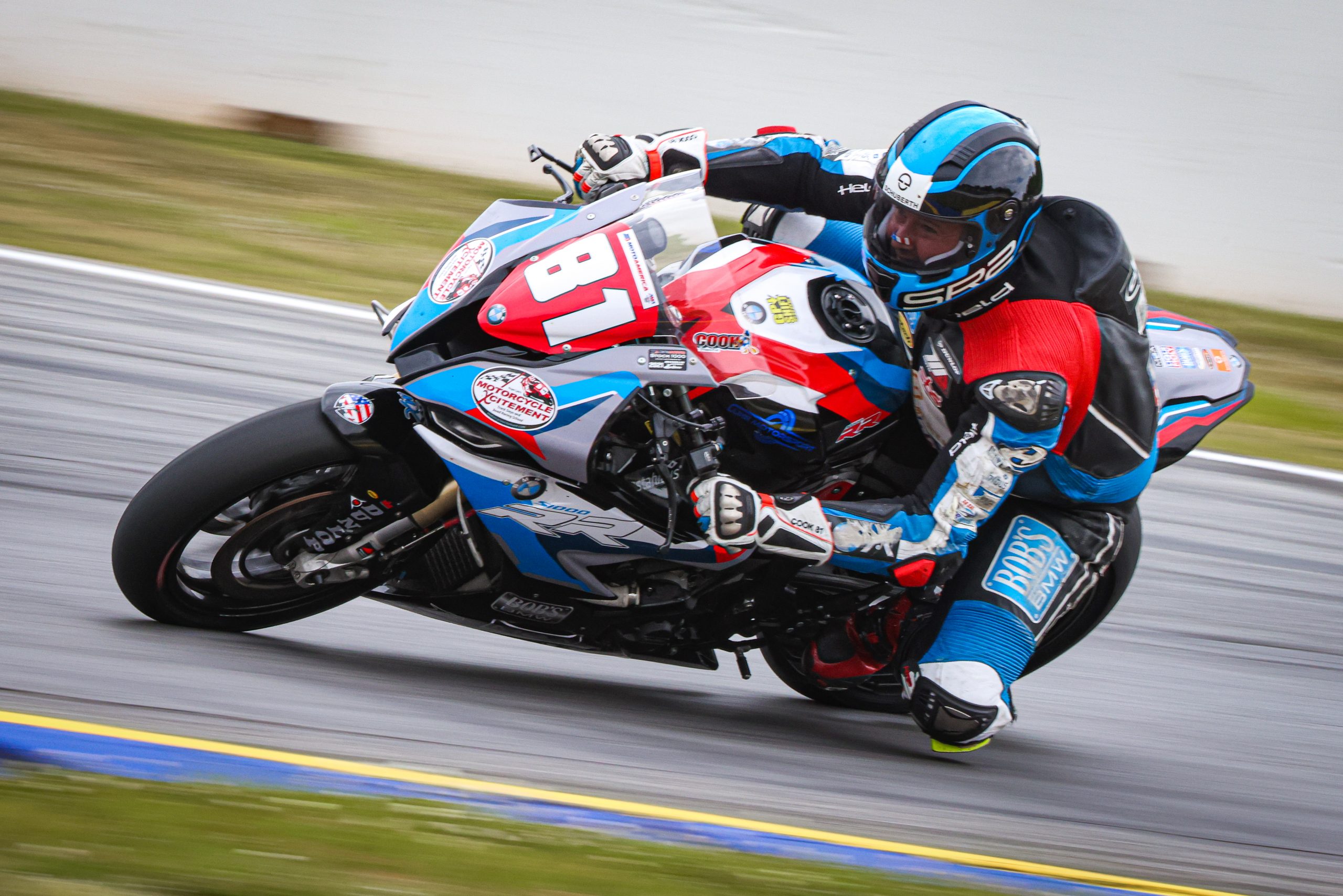 Jeremy Cook (No. 81) scored his first points-paying finish of the 2021 MotoAmerica season Sunday at Road Atlanta.
Photo credit: BrockImaging
Click here to download a high-resolution versions of photos included in this press release

BRASELTON, Ga. — For Jeremy Cook, his first full pro road racing season started at a track he’d never ridden on before. Despite enduring mechanical problems with his BMW S 1000 RR on Thursday and Friday, the Bob’s BMW Jeremy Cook Racing rider got a positive start to his first full MotoAmerica racing season when he finished in the points in Sunday’s Stock 1000 race.

Cook – who is an instructor for presenting sponsor Motorcycle Xcitement — first competed in a MotoAmerica race in 2015, and MotoAmerica’s season-opening Superbikes at Atlanta round marked the first of nine MotoAmerica rounds that Cook plans to compete in this year.

After encountering problems with his motorcycle’s clutch system Thursday night while prepping the BMW and Friday during the Stock 1000 Class’ Friday practice session, Cook qualified 23rd for the weekend’s two Stock 1000 races.

In Saturday’s race, Cook moved up three positions on the first lap, crossing start/finish in 20th-place. He got past another rider on Lap 2 and maintained 19th place to the end of the contest. In Sunday’s Stock 1000 race, Cook made another good start and was running in 15th place at the end of Lap 1. Though Cook dropped as far as 18th on Laps 8 and 9, he recovered in the latter stages of the race to finish 15th and claimed his first championship point of his 2021 campaign.

The next stop on MotoAmerica’s schedule is VIRginia International Raceway May 21-23. Though Cook has some bad memories of the Alton, Va., track from a severe crash he suffered there in 2009, the Maryland rider also has ample experience on the facility’s 2.25-mile North Course and will be targeting his first top-10 finish of 2021 that weekend.

Jeremy Cook / No. 81
“It was a bit of a struggle this weekend at Road Atlanta. We raced in several Championship Cup Series races at New Jersey Motorsports Park last weekend and thought we were fully prepared for what lied ahead. It was my first time racing at Road Atlanta, and it’s a steep learning curve with this very physical racetrack. Between trying to get the bike set up for a track we didn’t know and the mechanical issues we dealt with Thursday and Friday, it felt like we were behind the eight-ball most of the weekend. I have to give a huge shout out to Roger Lyle of Motorcycle Xcitement for helping us with track knowledge and technical support. I learned a lot about racing at Road Atlanta by going to school on the riders I was competing against and was able to use that knowledge to score Sunday’s points-paying finish. My bad memories of VIR still linger in my head, but I’m happy to be heading to a track my team and I know well.”

This press release has been prepared by Marino Communications on behalf of Jeremy Cook Racing. If you would like more information about this topic, please contact Michael Marino at 614.636.0199 or michael@marinocommunications.com