On Friday, April 3 2020, the new BMW R 18 will celebrate its long-awaited world premiere. BMW Motorrad will officially present the announced production bike featuring the Big Boxer for the cruiser segment.

This world premiere will take place LIVE on BMW’s Facebook Page at 8pm Central European Time, 2pm Eastern, 11am Pacific. Leading up to the premiere, you can follow along @BMWMotorradUSA on Facebook and Instagram as we count down to the reveal.

Immediately after the unveiling, initial information about the motorcycle including photos, videos and the configurator will be activated on www.bmw-motorrad.com/r18countdown.

BMW is setting aside 180 units of the R 18 Launch Edition. These early production bikes will be available exclusively for pre-orders which will be fulfilled on a first-come, first-served basis. You can pre-order the Launch Edition R 18, by visiting https://pre-order.bmwmotorcycles.com/#/pre-order/R18, starting Friday, April 3.

If you are one of our customers hoping to be among the 180 riders in the US to receive this limited edition BMW Motorcycle, you MUST visit the designated URL: https://pre-order.bmwmotorcycles.com/#/pre-order/R18 to reserve your space. While Bob’s BMW is very excited to roll out the red carpet to deliver the bikes upon their arrival, we are unable to reserve or place the pre-orders for you. If you have any questions about the bike or the pre-order the process, contact us immediately so you do not miss this very exciting opportunity!

About The Concept R18

The BMW Concept R18 is a new prototype flat-twin engine – the highest capacity boxer motorcycle ever produced. Simply named ‘Concept R 18’, this pure, stripped-down, raked-out bike gives more than a hint of what’s coming – in the cruiser segment. Clearly an exciting bridge between the aforementioned ‘hommage’ bike and the forthcoming series production motorcycle, the Concept R 18 has presence, attitude and promise in equal measures. The focus is the huge boxer engine – physically much larger in size than the 500cc version used in the hommage showbike, and designed to make a real statement. The spoked wheels have been chosen (21” front and 19” rear) to match the considerable proportions and the overall stance of this latest showbike which exudes attitude and presence. The modified front end and fishtail exhaust contribute to its custom, hand-made feel. 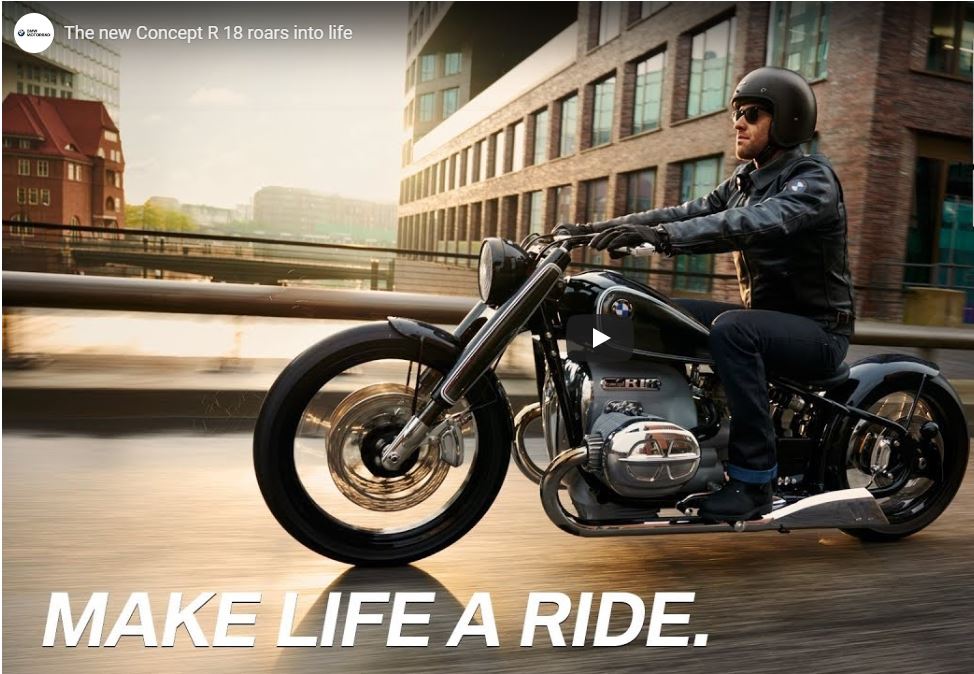 Low and long, raked out and understated, the Concept R 18 is a thing of beauty, with its polished aluminum cylinder covers, subtle color treatment to the motor, teardrop tank and fork, and areas of pin-striping with golden yellow tint in the deep, layered paint treatment. There are only three metal surface treatments used – either blasted, painted or polished – to give a clean, authentic atmosphere for the bike, while the iconic Metzeler-branded RILLE tires have a custom-made tread pattern and special color treatment on the sidewalls.

Anyone familiar with BMW bikes from the ‘50s will recognize the Pagusa-style seat, with embossed logo and hammered area on the leather. Open shaft-drive, cantilever rear suspension, a twin-Solex carburetor from a BMW 2002 car, a 1950s Bosch-inspired LED headlight mounted between the fork legs, no visible switchgear – the list goes on. And a walk around the Concept R 18 (as the motor’s plaquette proudly states) includes many surprises. For sure, it’s the continuation of a story that started with the R 5 Hommage.