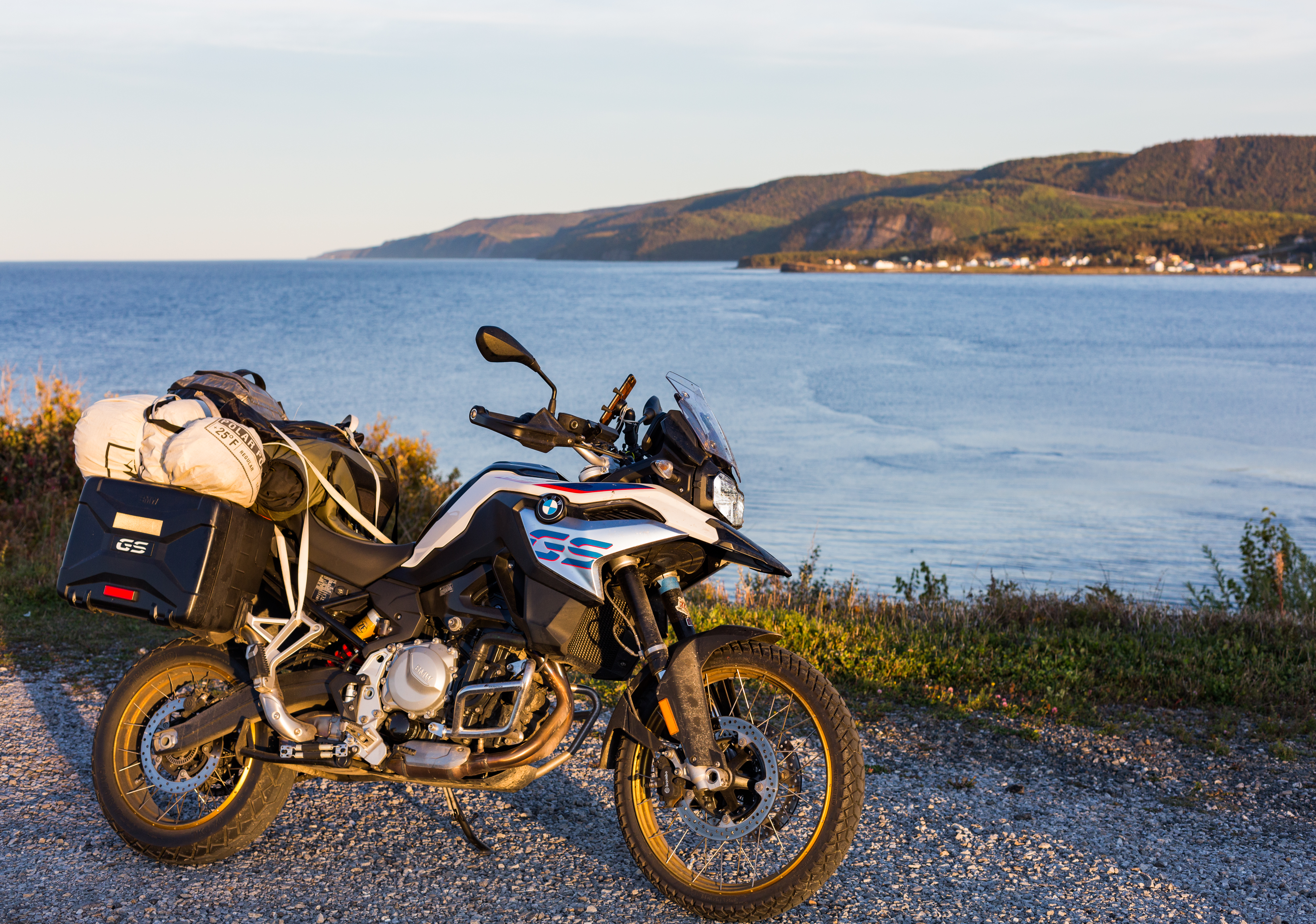 When it comes to perfecting the big bore adventure bike, BMW has never been one to rest on its laurels for too long. Ever since Gelande Strasse graced the headlines of the industry, each new iteration of the GS has brought new levels of refinement and performance.

When the F series first debuted, it was meant to tip the scales more in the favor of dirt than street. It was a compliment to the boxer GS, which was incredibly competent off-asphalt but had a bias towards the street. The F700GS actually was my introduction to BMW bikes, and spent a fair amount of time evaluating the 800GS before owning a 2009 1200GS for about a year. It was this arc of ownership that led me to land on the new F850. 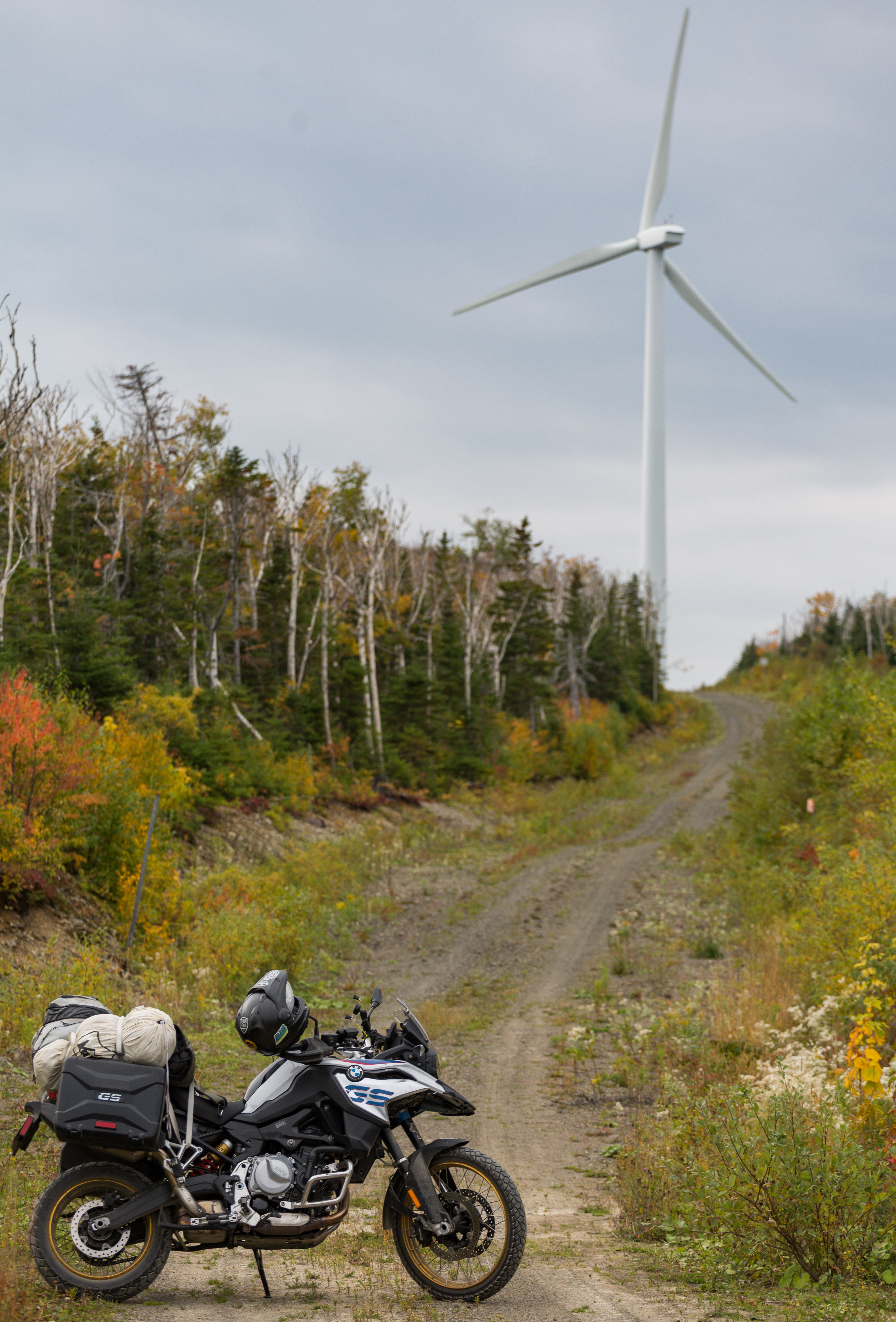 The main differences between the F and the R series are as follows. The R is renowned for it’s stump pulling low end torque with top end highway manners sitting at low revs. It also has the low maintenance drive shaft and anti-dive Telelever front end, while the F800 has inverted telescopic forks and a chain drive. I loved the eager revving nature of the 800, but it lacked the low end grunt of the boxer to muscle through low speed technical terrain. However the chain drive configuration is much more beneficial for off-roading, given the flexibility to alter the gearing with different sprockets. In the dirt, the 800 was much more apt to climb over rugged terrain with its taller ground clearance and 21 inch front wheel, and the slender profile was easier to maneuver in tight narrow trails. The suspension of the 1200 was a dream on the back roads, yet the front end of the 800 had a bit too much give for my aggressive riding style. The under-seat gas tank of the 800 made for exceptional low speed handling on the street, but the bike did have a tendency to get a bit light in the front end with long range high-speed cruising. It was clear that BMW had listened to the market feedback when they designed the 850, and created what I found to be the perfect balance between the F and R series over the course of a 7,900 mile trip through the Canadian Maritimes. 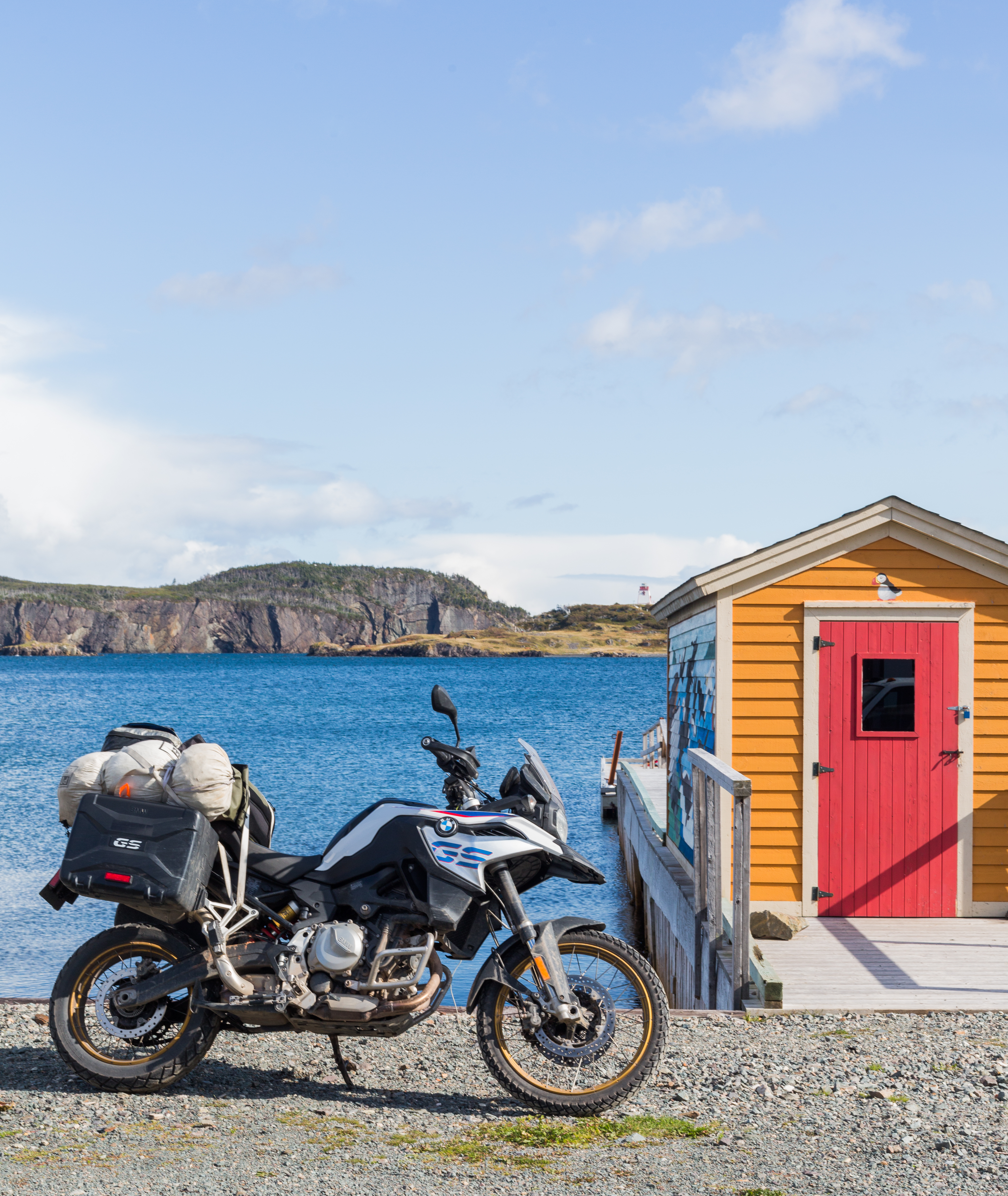 The route I had planned for the F850 covered a wide swath of terrain, from the Fjords of Sagueny and the coastal mountain curves of the Cote-Nord Region, to the rugged Alpine-esque off road terrain of Newfoundland. I set off on the month long trip loaded to the gills with as much luggage I could fit, and saw the first differences almost instantly. Although the decision to move the gas tank to the “traditional” location was met with confusion, it vastly helped with weight distribution. With a front/rear wheel load distribution of 49/51, the front wheel felt incredibly planted and confidence inspiring while navigating the chaos of the I-95 corridor. Furthermore, the introduction of a Steering damper helped the 850 track like an arrow. Cruising along at 70mph only called for the revs to hover above the 4,000rpm mark, which put it closely in line with the cruising pedigree of my old 1200. Better yet, at one point the TFT dash read a shocking 56 MPG consumption rate! Getting off the highway and onto the back roads towards the Adirondacks High Peaks revealed the prowess of the revised suspension. The front end is truly progressive in its feedback, and responds wonderfully to rider inputs. The initial bite of the brakes gave me enough compression to trail brake into a corner, and as the stroke compressed it sailed over imperfect asphalt with ease. Not once did I feel it bottom out, even with the worst potholes the road had to offer. Despite the heavy load of camping gear, a month’s worth of clothing, and camera gear, the bike still eagerly attacked even the most technical curves with composure. While on paper the bike did gain weight, I never noticed it comparatively to the old model. 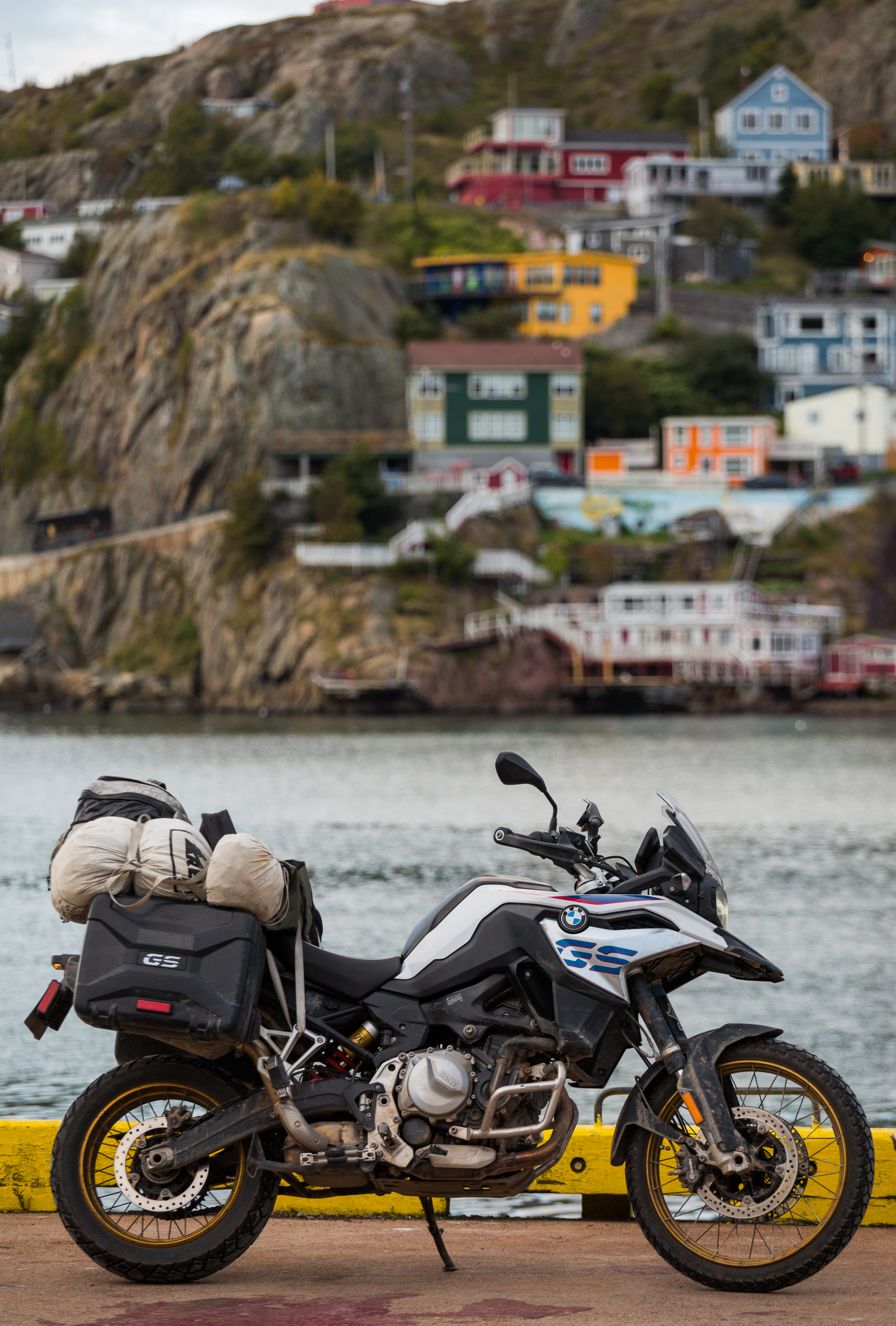 Route 138 and 132 running along the St Lawrence Seaway are a must visit for motorcyclists, and gave me the perfect opportunity to stretch the new engine’s legs. The route goes for miles as it crests and falls along the mountains right on the shore. Steep grades and S curves required quick adjustments of rider input, and the 850 came through in droves. The mid-range spread of torque is much more immediate and linear than its predecessor. Give the throttle a quick twist and it leaps forward to attack the road ahead, and encourages you to find the ceiling of its rev limit. Peak power comes in at 6,200 rpm, so this is a bike that wants to be ridden on the boil, but is perfectly content and tractable in the low end. The Quick Shifter in conjunction with the slipper clutch made for a stellar combo coming into sharp downhill turns. You’ll be coming along at a good clip and within a quick flick of the foot you’re engine braking down two gears and picking your line without locking up the rear. When it’s time to hit the apex, the howl of the engine as you pin the throttle and quick shift up is an intoxicating thrill. This new engine sounds absolutely spectacular with the new 270 degree firing order. Upon start up it settles into a low V-Twin esque rumble, and has an aggressive sound that refrains from being obnoxiously loud as the revs climb. The new addition of the dynamic ride modes . The Dynamic mode isn’t just a moniker for sportier throttle response, it’s truly responsive to your level of input. Come on the throttle softly and the bike will roll along smoothly, but give the throttle a quick snap and you may send the front wheel airborne! The Cabot Trail in Cape Breton Island also gave me an opportunity to unexpectedly put Enduro Pro to the test! On the route down from the highlands (about 1500 feet up) was some very inconsiderate road construction. The asphalt had been torn up entirely, and in its place was dirt turned to mud by a still-falling rain. The 12% downhill grade was more like a mudslide than a road, but Enduro Pro helped carefully modulate the throttle inputs and kept the rear end from stepping out severely. The ABS performed flawlessly as well, and kept the front end from washing as I tried to keep the descent in check amidst a flow of traffic. 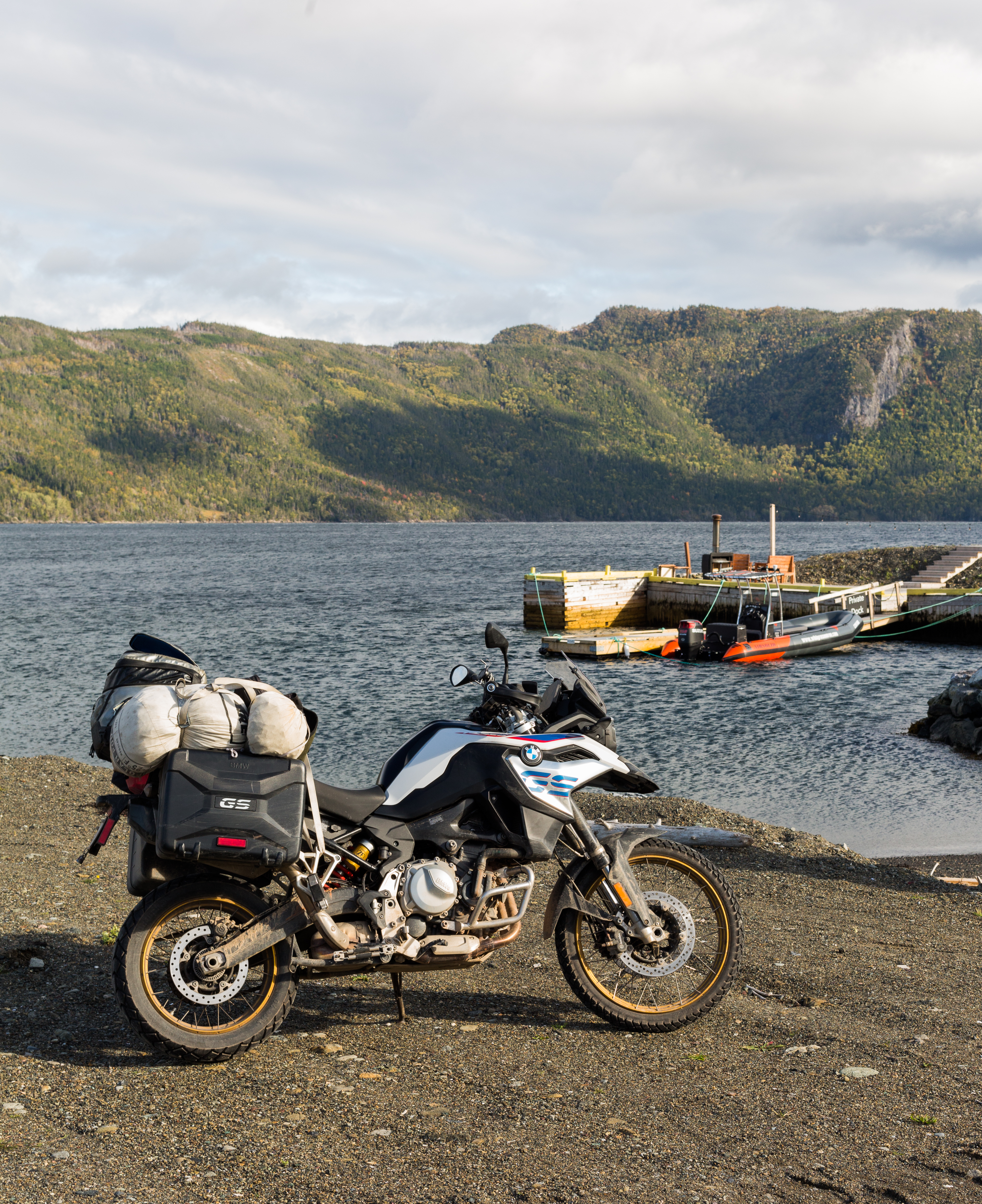 The multitude of trails branching off from the Cabot provided some equally challenging (yet far more enjoyable) off-road excursions. One particular trail was a span of double track with ruts, sand, and large rocks sporadically mixed in between. But up on the pegs the 850 chugged up and over the obstacles without even breaking a sweat! The tractable low end power made light work of rough terrain and the suspension never bottomed or pogo-ed. On an open stretch of gravel Enduro Pro turns the bike into an absolute riot of a bike! With street biased tires, the traction control will let you whack the throttle and pitch the wheel out to drift the bike around, but will stop short of an enthusiasm-induced high side. Better yet, the ABS is calibrated to allow aggressive front braking on loose surfaces without taking a dirt nap. The bike can tear down a fire road at breakneck speeds without even batting an eye at the terrain below. Dynamic ESA on the rear shock does an exceptional job of keeping the rear end composed under rapidly changing terrain. It softened the blow of an unexpected bump without a jarring hit coming through the pegs or wallowing out from being overly soft. Among all the electronics on the new model, the TFT dash brings some fantastic functionality to the table. First and foremost, the screen is exceptionally easy to read in the brightest of sunlight. It also gives immediate access to critical bike information such as tire pressure, fuel mileage, engine temperature, and voltage. The smartphone / Bluetooth integration is a wonderful addition as well. When paired up, you can be streaming music from your phone to your helmet, and having control over playing and skipping songs all from the wonderwheel! Being able to have this functionality without taking a hand off the bars is more convenient and safer than having to operate the buttons on a helmet comm.

In the month I had on the road, there was not one single issue with the bike, and it performed absolutely flawlessly. It tirelessly consumed road miles, conquered technical terrain with ease, and was a downright blast to ride! I spent almost an hour on the Fleur De Lis Trail in Cape Breton finding the edge of the tire’s contact patch and the 850 was always ready for more. The F series is now ready to go toe to toe with it’s big brother boxer, and performs better than it’s predecessor in every way imaginable.