World Travelers on Urals Arriving in Jessup on Jan. 3! 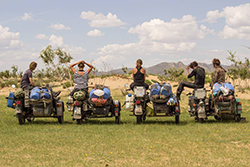 Just last week Bob’s BMW learned of the leavinghomefunktion project and was instantly intrigued. After speaking with the world travelers they were able to coordinate a last minute detour to Bob’s BMW on January 3, just days before they reach their final destination in New York.

Assuming everything falls into place perfectly (i.e. no surprise breakdowns!), the group of 5 traveling on 4 Urals are expected to arrive at Bob’s this Tuesday to share their exciting 2 year adventure with YOU!

We understand this is short notice but it’s an awesome opportunity! We hope you can help us welcome the creators of the leavinghomefunktion project on January 3, 3pm, at Bob’s BMW! Check Bob’s Facebook Page for updates.

leavinghomefunktion has been printing its tracks throughout the European, Asian and N. American continents with the image of x4 wobbling Ural 650s with sidecars. The leavinghomefunktion project is formed by an international group of 5 artists: Kaupo Holmberg (EST), Elisabeth Oertel, Johannes Foetsch, Anne Knoedler (DE), and Efy Zeniou (CY) who have over the past 2 years packed their lives and belongings into their 2×1 meter sidecars.

The group opted for the longest way to the West – one which crosses the entire East. Initiating this type of expedition meant exchanging their everyday comforts with the opportunity of learning from a diversity of social, economical and geographical conditions. Through this project they attempt to underline the importance of opening up to new input, shifting through different points of view and seeing the world through their own eyes – something which largely relies on the local reactions and forms of reception. A great point they find in such an adventure is learning how to adapt and integrate with daily lives in foreign territories and pushing their boundaries in ways which would expand their world views both physically and mentally.

Their decision was to use the unreliable 80s/90s Ural 650. This choice in vehicle was backed up by the idea of self integration: These bikes can be spotted in some of the most remote and unexpected regions of the world and thereforethey would be easy to find spare parts for and to repair – not to mention breaking the ice with local residents. Through this journey with old-timers they have had a wider chance of encountering how local settlements adapt as well as influence their daily environments. During the short bursts of time spent with locals they record how they work together to overcome communication barriers, find solutions and exchange knowledge through personal stories. While experimenting with documentation techniques they attempt to explore understandings of “territories” which are generally received and understood through mass and social media.

STAGE 1 – Crossing Europe and into Eurasia which finalized with their
1st wintercamp in the Caucasus region.

STAGE 2 – Crossing the Republic of Georgia,Russia, Kazakhstan, Siberia, Altai, Mongolia and the Russian Far East. Managing “The Old Road of Bones” left the group curious about how much they could push their boundaries further which led them to their 2nd wintercamp in Canada where they kickstarted preparations for The Kolyma Challenge.

STAGE 3 – The Kolyma Challenge was their most peculiar adventure so far. This took place in the remote regions of Sakha and Chukotka – extreme landscapes which are inaccessible to the average landway vehicle. By transforming their Urals with pontoons and propeller drives they opened up new ways for coming in contact with the isolated settlements found along the 1600 km Kolyma river. Having completed their waterway travels in Chukotka they re-transformed their Urals with an un-foldable trailer bridge which enabled them to manage the reoccurring river crossings that were expected throughout the undomesticated tundra.

STAGE 4 – The group has recently landed in Alaska and will continue to huff and puff all the way to New York City. Before Xmas is upon us they will shift from the Northern Lights where the lonely buffaloes roam to the concrete jungles of a glimmering traffic which never sleeps! This last stage is expected to be full of local surprises as the leavinghomefunktioners push their Old Soviet bikes through a highly westernized context. 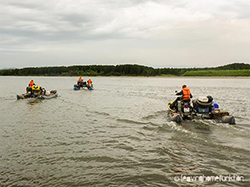 They sleep under the stars, or in the rain – even between swamps if need be. When the taiga and the tundra turns into a city they get to know the hospitality of friends of friends of friends…which makes the world a bit less stranger. Their main financial objective is to keep the Ural with a pulse (i.e spare parts and fuel) and for the travelers to continue collecting,processing and editing all the information which the Ural brings their way. The project is like the perfect backdrop whether you are into Huckleberry Fin, Kafka or the Beats but keeping in business for them means keeping in touch with reality at a different level. Parallel to a life on the 3-wheeler they host live presentations, develop crowdfunding campaigns, produce marketing material and correspond with book publishers, bloggers, newspapers, tv channels and magazines. Their wheels keep running through online supporters which contribute with small donations in exchange for some unique gifts from their landway adventure. To enable supporters to access the leavinghomefunktion piggy bank and give the artists a little push in their creative efforts the group has created a PATREON page www.patreon.com/leavinghomefunktion where people can give adonation and receive a unique set of gifts from the road. 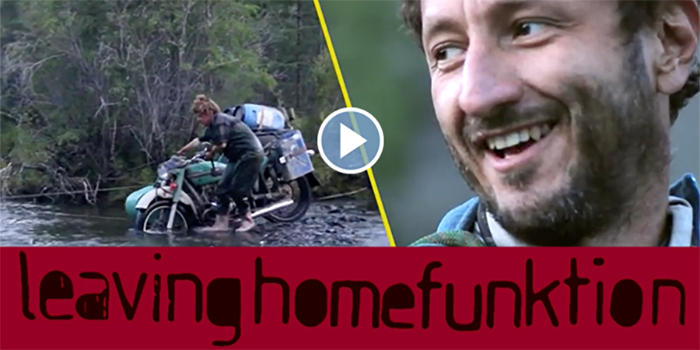