Bob Henig’s new museum of vintage motorcycles will be unveiled on Saturday, May 21, from 10am-3pm at 10630 Riggs Hill Rd. Suite Y (across the street from Bob’s BMW Motorcycles) in Jessup, Maryland. The Grand Opening is free to the public and showcases over 65 vintage and classic BMW motorcycles, sidecars, riding gear, memorabilia, art and more that Bob has collected over the years. 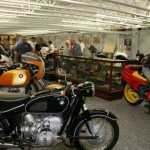 “I’ve always collected things and always enjoyed sharing what I collect,” says Henig, who first opened a vintage museum in his dealership in 1999. Now he has moved his motorcycles and accessories collection from his home storage and dealership to a new 3,600-square-foot space covering two floors of a separate building. The museum contains BMW models dating from 1925 to the present day, restored or not. In a few cases, motorcycles are still in their shipping crates. Plus Steib sidecars, cases of manuals, advertising art and even a child’s tricycle version of one classic model, are on display.

Some of the unusual pieces are a 1913 Indian (one of two non-BMW motorcycles featured), two 1940s BMW models used in World War II, a “kneeler” that set a land speed record of 132mph, and a 2001 special edition C1, designed to be ridden without needing a helmet.