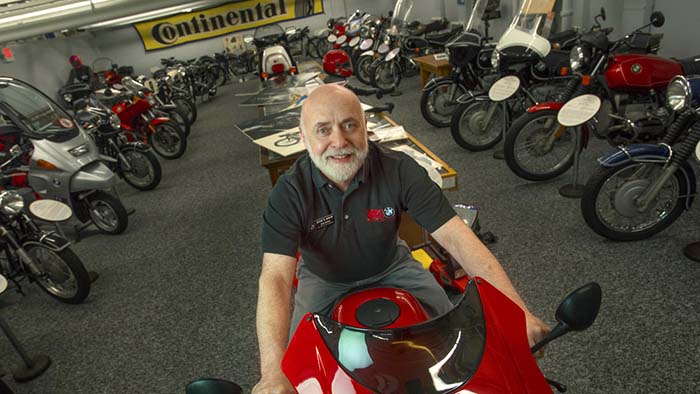 Bob Henig, owner of Bob’s BMW in Jessup shows off some of his vintage motorcycles.

The Baltimore Sun
by Lane Page

You won’t smell the exhaust or hear the engines roar — Bob Henig’s BMW Motorcycle Museum in Jessup is not interactive — but it’s not hard to imagine yourself wearing aviator goggles with the wind in your hair.

If anyone does ride these bikes, it is their owner, as he rotates some in and out of display.

Creating a museum wasn’t Henig’s excuse to start collecting motorcycles; it’s the other way around — “a hobby run amok,” he says.

“I’ve always collected things and always enjoyed sharing what I collect,” says Henig, who first opened his vintage museum in 1999. “It’s just stuff, unless I get to share it.”

This month he’ll be sharing a lot more. More than 65 motorcycles, accessories and riding gear have been moved from home storage and his dealership across Guilford Road to two museum floors dedicated to BMW bikes, art and history. A grand opening on May 21 will unveil some 3,600 square feet of vintage bikes, Steib sidecars, cases of manuals, advertising art and even a child’s tricycle version of one classic model.

BMW models dating from 1925 to the present are on display, restored or not. In a few cases, they were never taken out of the shipping crate.

Some, like the 1913 Indian (one of two non-BMW motorcycles in Henig’s collection), may conjure memories of silent movies, while two 1940s BMW German models are reminiscent of World War II, in which they were indeed used.

Another bike, the Kneeler, was built without a seat but with a sidecar for an outrider and was designed for straight speed — it set the land record of 132.45 miles per hour. In contrast, the 2001 semi-enclosed, special-edition BMW C1 was considered the safest bike on the road and designed to be worn without a helmet.

“There are only a few truly extraordinary BMW motorcycle collections here in the United States, and Mr. Henig’s museum would be on that list,” says Jim Hopkins, a fellow collector of BMW bikes and memorabilia.

Like Henig, Hopkins saw a BMW bike in high school and never forgot it. Decades later, he purchased that very model.

“BMW motorcycles,” he says simply, “are works of art.”

Click HERE for the full article and more photographs of the Bob’s BMW Vintage Museum.