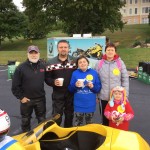 Bob Henig at the Baltimore/Washington Ride for Kids

Local children battling brain tumors received an outpouring of support from more than 200 participants who gathered for the 24th Baltimore-Washington Ride for Kids on Sept. 27.

“Keep doing what you’re doing because with your help, we are making a difference,” Dr. Edward Ahn of Johns Hopkins told the crowd.

Motorcyclists met at Turf Valley Resort in Ellicott City, Md., before taking a scenic route through rolling hills in the countryside.

The event had raised $110,576 by ride time, and is still collecting donations online. Fundraisers will receive incentive credit through Oct. 27.

Thank you to the volunteers who organized the event. This year’s task force leader was Tom Chicca.