The unknowing observer may have perceived mayhem prevailing during the Annual Running of the Dogs during the 2015 Big Dog Adventure Ride, but entrants went away lusting for more of the organized motorcycle adventure chaos.

Billed as the “Transcendental Last Starting Big Dog Adventure Ride,” the 25th event added an extra day of high altitude ground pounding to celebrate a quarter century of the fraternity of like-minded big displacement dual-sport aficionados pushing themselves and their motorcycles to extreme limits.

The event started in Golden, Colorado where veteran Big Dog entrant and owner of Wolfman Luggage Eric Hougen sponsored a Welcome Party for the 2015 entrants. Multi-year entrants spent the evening recounting wild events of years past while newbie entrants listened in awe. For example, a large crowd listened to the tale from a Texas Kawasaki KLR650 rider who lost the track on a high speed dirt road in Wyoming, rode down into the barrow ditch running alongside and was bounced off the back of his motorcycle at speed, doing a double back flip in the air before landing in softening sage brush. After the story was told several newbies expressed doubt until a veteran Big Dog stepped forward and verified the recounting by saying he saw the whole episode because he was following the KLR rider, but managed to stay on the road while the KLR vectored off, riderless through the desert.

Day 1 – Day 3 found entrants topping some of the toughest mountain off-road passes in Colorado. Red Cone, Webster and Mosquito Passes all saw Big Dog entrants mounted on 640cc or larger motorcycles cross over them, some during severe mountain rain storms. Each night the tired and broken Dogs would return to their base camp in Silverthorne, Colorado, where Kawasaki USA had established a welcome and media center for entrants manned by volunteers from Grace Moto Adventures.

Like a good Boy Scout, this Big Dog demonstrated his tire plugging skills after finding a two-inch long nail stuck in his rear tire.

One entrant wrote after Day 2, riding with a group of advanced riders that topped a mountain only to turn around and ride back down. “I was flabbergasted. Surely I thought we were going somewhere. I did not throw a helmet or kick rocks, but I was plenty astounded. I had led the way up and target fixated on a two-and-a-half foot deep rain gully in which I promptly stuck my front wheel and crashed. That was bike pickup number one at 12,000 feet. Of course, that then necessitated starting on a steep pitch and getting cross-threaded a second time. Then, I helped a Big Dog from Wisconsin pick up his bike (twice) and found him an off piste route around the trail so he could get up. Then I walked down and picked up another downed Dog’s bike, and walked it up, using the throttle and others steadying the bike through the worst part. Well winded and beaten, I stumbled up a quarter mile to where everyone was enjoying the view. So, yeah, I was a wee bit surprised when told that everyone was now ready to go back down. It was a ‘whoa cowboy . . .’ moment.”

Another new Dog expressed surprise when he opened his Rider’s Kit and could not find routing instructions for the next days nor GPS coordinates or downloading information for his GPS. He asked a veteran Big Dog, “How will we know where we are going if we don’t have maps or a guide to lead us? I know we stick with a group, but aimless wandering seems to invite the risk of getting lost.”

The veteran Dog looked at the newbie and said, “Now where would the adventure be if we mapped everything from the get-go? If you’re looking for us to make you lunch on the side of the trail or put a foil covered chocolate on your pillow at night, you’ve signed up for the wrong adventure. Stick with your group and you’ll be fine, nobody gets left on the mountain.”

Old and new BMW models competed evenly over some of the more difficult sections of the event. 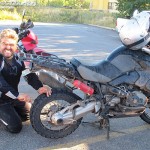 That night after a fun day of adventure the newbie Dog had to admit the apparent mayhem was really well organized and wildly fun. When a veteran Dog from New York who owns a chocolate making company gave out individual plastic wrapped Big Dog chocolates designed with a dogs paw on one side and the Big Dog logo on the other, the newbie Dog said, “OK, I get it now. These chocolates are well earned Big Dog chocolates, not wrapped in foil or put on my pillow.”

Not to be left out of the celebration, BMW of Denver hosted evening entertainment. The founding sponsor of the Big Dog Ride offered two multi-media presentations by entrants. The first, “Across Russia Dodging Babushkas On A BMW,” was by veteran Big Dog David Rankine, who shared his adventure across from South Korea to Europe via Russia. The second presentation, “Cambodia – The Long Hard Big Dog Way Around And Down,” was presented by John Harkins and recounted his self-guided ride through Cambodia with “no agenda and no fixed time.”

Another fixture in the Big Dog activities was Bob’s BMW of Jessup, Maryland. Bob’s sponsored two entrants in the 2015 event and gave away gift packages and discount certificates worth $1000 to lucky recipients needing replacement parts for their BMWs.

Several factors contributed to the possibility of the 2015 Big Dog Adventure Ride being the last. According to one of the organizers, Clem Cykowski from BMW of Denver, “Our core group of BMW riders are not getting any younger. What we did with a R80G/S or R100GS is beyond some of our brittle older bones now, plus the motorcycles have evolved in weight. As was once said, ‘A man’s got to know his limitations,’ and for some of us muscling 600 pounds of 100 plus horsepower is beyond our limitations. That said, these modern adventure models have abilities none of us could have dreamed of when we started the Big Dog Ride 25 years ago.”

To some traditionalists like Ed Russell, his BMW R100GS carried the BMW flag.

Another factor has been the increased traffic in the mountains favored by the Big Dog entrants. In the early 1980’s, when the Big Dog Ride was being born, there were few events designed for big dual sport motorcycles meant to be ridden to the event and then used in the event. Over the years, with the increased interest in motorcycle adventure touring and adventure riding, numerous copies of the Big Dog Ride have spawned, some organized by motorcycle tour companies as packaged training courses while others are manufacturer sponsored adventure rides.

The spirit of the Big Dog entrants can be seen in the wide range of adventure model motorcycles entered in the event each year. While the most common model motorcycles remain the BMWs, the second most common have become the Kawasaki, and specifically the KLR650 models. Often a BMW owner will have a KLR650 as their off-road motorcycle, choosing to use the BMW for their road work and the less precious (expensive) Kawasaki for their dirt work. Other entrants profess to be “adventure motorcycle agnostics,” claiming not to know which brand, make or model is best for adventure riding, choosing to pursue their adventures on models ranging from an electric Zero to a monster Victory.

Some of the early entrants and their support crew prior to dirtying themselves and their motorcycles over wet and muddy passes like Red Cone and Webster on Day 1.

Kawasaki USA hosted the Big Dogs with a sponsored BBQ of two-inch thick T-bone steaks and served as base camp hosts for the event.

From KTM to Victory, the fraternity of Big Dogs has always been about the camaraderie of the entrants.

A first on the Big Dog Adventure Ride was an entrant with his riding companion, a little dog, on the back.

The history of the Big Dog Adventure Ride can be found on their website From there adventurists can see how the event morphed from a weekend of off-road adventure riding for strictly BMW enthusiasts to the modern group of motorcycle adventure seekers less brand specific and more tied together by their fraternal belief that any motorcycle can be used for adventure riding.

Whether the 2015 Big Dog Adventure Ride was truly the last event or the Big Dog Ride rises from the ashes like a phoenix and morphs further like several Dogs wished, entrants in the 2015 event agreed it had been their best

As the Big Dogs were cutting through their two-inch thick T-bone steaks during their traditional BBQ, a KTM rider stopped to point out to the Suzuki entrant sitting next to him, “Kawasaki sure knows the way to a Big Dogs heart by sponsoring these Big Dog steaks, but it’s the organizers who make this memorable by having a violinist wander through our midst while playing Beatles songs.”