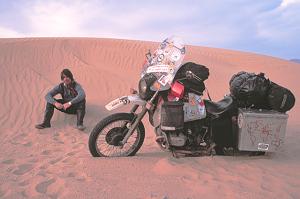 “The longest, most difficult motorcycle journey ever attempted.” (1912)

The first couple to ride across the United States made their incredible adventure in 1913 on a Henderson motorcycle equipped with a self-made sidecar. During their ride, having left Long Beach, California on May 24, 1913, they marked the trail for other motorcyclists like Cannonball Baker to follow, and eventually arrived in New York City on September 6, 1913.

The free seminar, LONG DISTANCE RIDING ADVENTURES – 101 YEARS, or FRAZIER TALKS NAKED, dispels some of the myths and tales about the first motorcycle adventure riders while sharing numerous secrets and exposing naked truths of modern day adventure travel. Seminar presenter, Dr. Gregory W. Frazier, has himself circled the world five times and is currently on a pit stop during a sixth attempt to “girdle the globe.” Author of 14 books, producer of 10 films on motorcycling and well-known Adventure Editor-at-Large and columnist for several motorcycle publications, Frazier says of his own adventures, “I hate adventure that involves snakes or sharks, or falling down when motorcycling au natural.”

DOWN AND OUT IN PATAGONIA, KAMCHATKA AND TIMBUKTU, Frazier’s latest book, is a recounting of a lifetime of global motorcycle travel and adventure. Published by the world’s largest motor book publisher, www.motorbooks.com, the all color coffee table book has been described by industry insiders as “Amazing!”

Frazier will be available at BOB’S BMW Saturday afternoon to autograph books (bring your own or buy one from BOB’S), “schmooze, kiss babies and mix with like-minded motorhead adventurers of any year, type, make or model motorcycle.”

Frazier’s cyber base is www.horizonsunlimited.com/gregfrazier