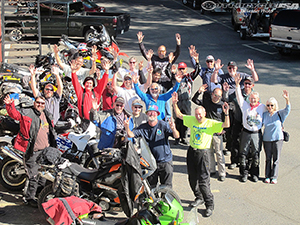 Having made multiple runs across the globe, round-the-world adventurer Dr. Frazier imparts some of his motorcycle traveling wisdom in his monthly Dr. Frazier Rides column.

“Deranged, maniacal, demonic and negligent” were words used by the former AMA Motorcyclist of the Year, Bob Higdon, when he gave the official benediction at the start of an annual Big Dog Ride. He also included the words “aesthetic, pictorial, grandeur, supereminence and best-of-the-best.” Higdon closed his offering of pearls with, “You have a great thing going here with the Big Dog Ride. I hope none of you die!” and then mounted his BMW R80G/S and piloted it quickly in the opposite direction.

The 2014 Annual Running of the Dogs offered an opportunity to look inside the make-up of the new and old members of the unique fraternity of Big Dogs. While not a secret society, the Big Dog Adventure Ride does have some elements of membership not found in other adventure designed motorcycle events.

Founded on the concept of riding a large-displacement dual-purpose motorcycle to the event, off-loading luggage, and then riding some of the toughest trails and tracks found in the Lower 48, the core concept still exists. Original sponsor, BMW of Denver, accepted the eventual morphing of the event to welcome non-BMW bike entries. In 2014 entrants included KTMs, Kawasakis, Hondas and Suzukis, but all had to be 640cc or larger. 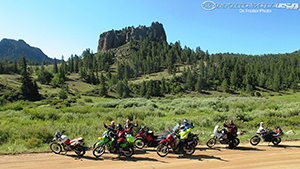 For three days the entrants bounced their motorcycles and themselves off rocks and trees, plowed through deep mountain streams and brown murky mud wallows, often dodging ATVs and errant 4×4 drivers over some of the highest passes in Colorado. While the wide range of large-displacement motorcycles offered an interesting mix for a tire kicker in the parking lot, it was the genetic elements of the entrants and their professional backgrounds that drew interest in 2014. Are there some genetic similarities that drew this group together to possibly hurt themselves and their motorcycles as they pushed adventure-riding envelopes to levels far away from posing at Starbucks on a Sunday morning with their ADV motorcycle?

One Big Dog wrote of the others that they are “down to earth, solid, self-aware, self-confident, hard-working, contributors…. men of integrity who share a passion for adventure motorcycle riding.” Within that definition was one self-proclaimed ditch digger, a man who worked for a county government operating equipment to literally dig ditches, and another who was a retired financial services executive. Others included the manager for a major manufacturing company, a national evangelist, educational technology sales representative, insurance broker, general building contractor, service engineer, writer, mechanic and a statistician.

A look at the geographic bases for some of the entrants found them piloting their motorcycles to Colorado from distant points such as California, Texas, Arkansas and Virginia, others from neighboring states Utah, Wyoming and New Mexico. One entrant, from Honolulu, flew from Hawaii to connect with his motorcycle in Seattle. He then rode two days to the event, off-loaded his travel gear and banged up himself and his Africa Twin for three days. He then repacked and rode back to Seattle, stashed his rare Africa Twin and flew back to Hawaii. Another first-time entrant, sponsored by Bob’s BMW, rode his fully-loaded BMW R1200GS Adventure from Virginia to the event start point in Buena Vista, Colorado, where he off-loaded his traveling gear and bounced off rocks, slid through mud and wobbled in sand as a new Dog. He then licked his wounds and humped the interstates back across America. A Happy Trails sponsored entrant from Michigan entered a stock 2006 Kawasaki KLR650 that had only a Happy Trails skid plate and “Nerf” or protection bars for his possible get-offs. 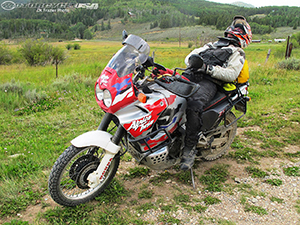 When asked what they thought contributed to their adventure riding genetics, one answer was, “I have always liked the ability to get away from the busy roads with my motorcycle, to explore and be closer to nature.” Another said, “I like pushing myself, taking risks, testing my riding skills with my road bike, but managing the risks.” A third proclaimed, “I bought this motorcycle for its advertised dual-purpose attributes, to be able to ride it on an interstate or a jeep trail. It cost me a fortune, more than I expected after I got it equipped, so I like to make it earn its money.”

Some of the entrants were budget conscious, as represented by the number of Kawasaki KLR650’s entered. Cited as “the least expensive ride to adventure,” several of the entrants admitted to owning expensive road bikes but using their KLRs for more aggressive riding away from cruiser territory. Kawasaki Motors Corp., USA rewarded all the 2014 entrants in the Big Dog Adventure Ride, not just Kawasaki KLR entrants, by sponsoring meals that included the annual Big Dog BBQ, a way to all the Big Dogs hearts, through their hunger after a hard day of riding, and their love of a good steak.

After 24 Big Dog events and numerous copies around the world, ranging from the Big Bird Ride in Japan to a Big Puppy Ride in the USA, the original Big Dog Adventure Ride remains unique. While the men who comprise the field of entrants have been cited as deranged, maniacal, demonic and negligent, they also enjoy the fraternity of like-mindedness, being pure adventure seeking motorcyclists while agnostic and accepting when it comes to the best motorcycle make or model for adventure riding or touring, a gene unique to their core.

An adventure riding whisper in the wind at the 2014 Big Dog Adventure Ride was the 2015 Annual Running of the Dogs would be the last. One veteran entrant lamented, “It would be like putting a trusted old dog down,” while another suggested, “There could be a last last?” The 2015 event is slated for August 9 – 12.