-September 15 posted by Ride for Kids® 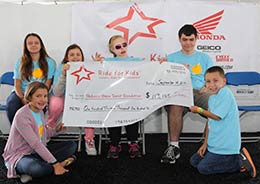 Beautiful skies and warm air accompanied more than 200 participants at the 23rd Baltimore-Washington Ride for Kids on Sept. 14. The event had raised $113,105 for the Pediatric Brain Tumor Foundation by ride time.

“Because of you all, we are finding inspiration which is leading to progress and hope,” Dr. Chetan Bettegowda of Johns Hopkins University School of Medicine told the crowd. “There used to be dozens, now we have hundreds and thousands of people around the world working on research for pediatric brain tumors.”

The event is still collecting donations online at www.rideforkids.org. Fundraisers will receive incentive credit through Oct. 14.

Thank you to the dedicated volunteers who organized the event. This year’s task force leaders were Tom Chicca and Marcy Rich.