The Americas: Top to Bottom 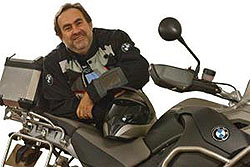 Some of you may already be following good friend and customer, Jorge Serpa as he travels the Americas top to bottom, but for anyone who is not you can start today! His adventure is planned to last through March 2015 and Bob’s will be providing regular updates along his journey.

Jorge departed on August 3 from Washington D.C. on his BMW R1200GS (A.K.A. The Mule which was of course purchased here at Bob’s BMW!) on a pre-planned route to Ushuaia, the southern most city in the world. Total distance traveled is an expected 31,000 miles, from August to the early part of December (Part 1) and from December to late March 2015 (Part 2).

Part 1 covers the stretch from Washington D.C. to Alaska and then south to Panama City; and Part 2 goes from Panama down to Ushuaia and then back to Rio De Janeiro, Brazil. The trip was divided up this way for financial purposes. If not able to secure enough funds for the whole trip, upon reaching Panana he will return to D.C. via the southern states. 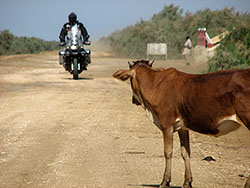 This is not Jorge’s first rodeo to say the least. He decided years ago he wanted to spend most of his time traveling the world by “alternate means of transportation” and has since done just that crossing the Atlantic from Brazil to the US on a 35′ sailboat; completing a Round the World journey via Amtrak trains, a container vessel, the Trans Mongolia, and Trans Siberia trains; driving on a motorcycle from Paris to Lisbon and then onwards to Guinea-Bissau, just to name a few! Every adventurer approaches their adventure differently and Jorge is a planner. Jorge sat down to plan the America’s route and itinerary on a day to day basis and took everything from financial challenges, to weather challenges, to landmarks he didn’t want to miss into consideration.

For instance, the areas to be covered during the time he travels Jorge identified three important weather conditions to take into consideration:

In addition to this Jorge researched ferry dates leaving AK and returning to the Lower 48 and decided well in advance which ferry makes most sense for his traveling purposes. His plan is to be on the September 8 ferry because the following September 22 ferry would mean being in Alaska well after the autumn frosts have started and to leave earlier than the 8th would only mean he would have more time to kill before entering Central America.

An album has been created on Bob’s Facebook page and will be regularly updated or you can check out Jorge’s Facebook page to get a more live feed. You can learn more about the trip by visiting his website.