Have sidecar, will travel for 96-year-old ‘Millie’ Bailey

By Janene Holzberg, For The Baltimore Sun 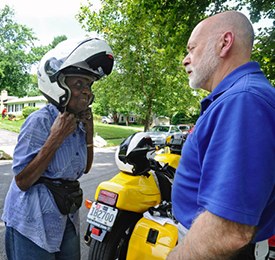 Millie and Bob getting ready for the ride.

Vivian “Millie” Bailey is once again up to her well-polished trick of not acting her age. With one quick phone call from her home in Running Brook, the 96-year-old community activist recently arranged to check off an entry that’s been on her to-do list for a long time: take a ride in a motorcycle sidecar. Bob Henig, owner of Bob’s BMW in Jessup, was not only willing, he also owns the perfect sidecar rig for the journey — a bright-yellow GG Duetto manufactured in 1997 in Switzerland, one of only two on the continent.

“This will be the second-most-memorable trip I’ve taken,” Bailey said from the porch of the rancher she’s called home for nearly 45 years as the adventure got underway July 18. “The first was a ride on the Concorde from London to Dulles [International Airport] in 1988.”

Henig told his passenger that the excursion on scenic back roads to visit her close friends in Sykesville just might top her pricey flight on the now-retired supersonic transport that traveled at more than twice the speed of sound.
“I’m hoping by the time I bring you back, it’ll be close as to which trip was more fun,” the Columbia resident told her, quickly adding that they’d only be traveling at 45 mph or so.

Henig practically had to take a number and get in line to see who would be the first to escort Bailey. She said a TV reporter and motorcycle enthusiast she met when she served on a judicial nominating commission years ago was the first to egg her on. 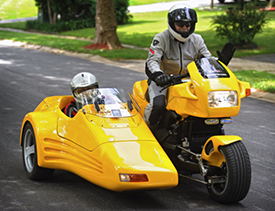 “It all started with Dick Gelfman,” Bailey said of the retired WJZ newsman, who is known for organizing Ride Across Maryland, a fundraiser for breast cancer research. Bailey remains in contact with him and his wife, Lenore Gelfman, a Howard County Circuit Court judge.

Henig began encouraging Bailey to take a ride in his sidecar seven or eight years ago after “we kept showing up at the same places,” she said. Bailey has been a member of the Howard County Police Advisory Council since it was formed in 1992 by then-Police Chief James Robey, who appointed her. Henig is on the board of the county police foundation, so their paths often cross.

Robey, an Elkridge Democrat who retired in 2014 as a state senator and previously served two terms as Howard County executive, said he wasn’t surprised to learn of the unusual trip but wondered with a laugh “why Millie wasn’t the driver.” “She’s so active, and she knows everybody. This is why she has stayed alive as long as she has,” he said, noting that she still drives a car. “She’s one gutsy lady.”

Bailey, who claims to know “two-thirds of the people in Columbia,” attributes her longevity to a busy schedule, a healthy diet and not worrying about things she can’t control. A former manager for the Social Security Administration and a widow with no children, she has served on numerous boards of county nonprofits and organizations over the years.

Running Brook Elementary School students call her their “Guardian Angel” for her fundraising efforts there, and she runs a group that sends homemade cookies to American troops overseas. “This is going to be a surprise for my adopted grandkids,” Bailey said before the pair set off. “They know I’m coming, but they don’t know how.” Henig assured his passenger that she was in for “a spaceship-smooth kind of ride” in his $75,000 Duetto, of which there are only 31 in the world. The manufacturer had hoped to build 100, but BMW stopped making the K1100 motorcycle that tows the rig, he said. He owns five other sidecars and 70 motorcycles, including a motorized unicycle.

As Henig flicked an electric switch to lift the sidecar’s hood and helped make Bailey comfortable, longtime neighbor Barbara Bryan happened to walk up the street with granddaughter Leah Williams. “I’m so glad I got to see this,” said the retired nurse, who’s known Bailey for 42 years. “Nothing gets by Millie. Her mind is so fast. This is amazing for her.”

When the pair arrived 50 minutes later at the home of Julie and Ken Girardini, the couple said they were caught off-guard by the sight of their friend, whom they assumed would be arriving in her Ford Focus. “It was quite a shock, definitely, but she was having a ball and was all smiles,” Julie Girardini said. “Millie is always willing to try something new.”

Bailey said afterward that the ride was “just wonderful.”
She’s tried other unusual conveyances, she said, like the time she unhappily rode a camel in Morocco. She did enjoy riding an elephant in Thailand, though. Henig said Bailey was “the perfect passenger,” riding with her face shield up and a contented expression that “put a smile on my face all day.” So is Bailey done with adventurous modes of transportation? “Oh, I wouldn’t say that,” she said. “Something exciting might come along, so I can’t rule anything out.”

Click HERE for more photographs and a video of the ride.