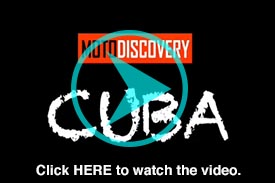 ONLY 1 SPACE LEFT! This can be either a solo rider or a couple but only one bike is available. The bikes are a R1200GS or a F650GS Dakar. Sign-up TODAY!

Whose coming with us?! The dates are booked, March 2-14, 2015. Bob invites you to join him and MotoDiscovery on a 12-day motorcycle adventure through Cuba, an exclusive opportunity to explore a country rarely visited by outsiders…at least not legally. The tour will be led by Christopher Baker, a Cuba travel expert and award-winning author. This tour is more than your typical motorcycle adventure, this is an opportunity to travel back in time and experience the culture through people-to-people interaction with locals. You will ride through the Cuban countryside, stopping along the way to meet natives and make friends, and learn about Cuban history.

Cuba is a country that has long been off limits to visitors from the USA. Even after a half century of embargos, political saber rattling and intense debate, Cuba–a mere 90 miles from our shores—is as controversial as ever. But we choose to push politics aside and now MotoDiscovery is able to provide legal travel to Cuba for the U.S. motorcycle touring enthusiast. 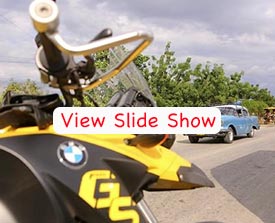 What makes this possible? You must be licensed by the US government or have access to a license that permits travel to Cuba. The licensed program must involve a full schedule of educational based activities that promote meaningful interaction with the people of Cuba as mandated by US Treasury Department and Office of Foreign Assets Control (OFAC).

For MotoDiscovery, “people to people” (P2P) is nothing new. Wherever we ride in the world, we regard these encounters as fundamental to the travel experience. And in this country, where in so many respects the clock stopped in 1959, making friends is easy, made even easier because we will be traveling by motorcycle.

This itinerary has been designed exclusively for Bob’s BMW and friends and is unlike anything on the MotoDiscovery program. Cuba is on the brink of change. As we all know, windows of opportunity have been known to close when it comes to Cuba. But today we can ride Cuba thanks to MotoDiscovery, which received an OFAC “people-to-people license” in 2012. Cuba is on the cusp of major change, and there is no better time to experience it than now.

Day 1. Arrive Miami – The tour commences with the rendezvous in Miami. Arrivals should be scheduled in time for a 5 p.m. briefing. Topics covering riding in Cuba, expectations of OFAC (Office of Foreign Assets Control / US Treasury Dept.) safety, etc, will be covered. Dinner to follow. Sofitel Miami Airport

Day 2. Havana – expect to leave hotel as early as 5 a.m. (depending on flight schedules) for Miami Airport. Arrival Havana (about 40 minutes in the air) where we’ll be transferred to El Aljibe for your first Cuba dining experience. Check into the hotel, pick up the bikes and then a short ride along the Malecon, ocean boulevard for a cultural encounter (P2P) at the Fuster community art project; then to the home (P2P) and workshop of Luis Enrique González, president of Cuba’s harlista (Harley-Davidson) club to learn about motorcycle maintenance in Cuba. Return to hotel and then dinner at La Guardia. (P2P); an invited guest will join us for dinner. 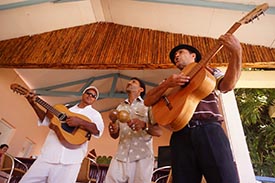 Day 3. Havana – After breakfast (P2P) prominent architect and urban planner Miguel Coyula will educate us about the history of Havana and the challenges that the city’s contemporary urban planners face. A visit to the (P2P) H. Upmann cigar factory will teach you everything you ever wanted to learn about one of Cuba’s most noted exports and traditions. Ride to the edge of town where you’ll experience an encounter with young students and teachers at the (P2P) San Antonio de Los Baños School of Arts. Lunch at Il Divino (P2P), a private restaurant where we’ll meet the owners and learn of how private restaurants are a fresh development in Cuba society. Continue to (P2P) Museo Hemingway, the former home of Ernest Hemingway, for an exchange with the museum director and staff. Return to hotel, then dinner at one of Havana’s finer private restaurants with invited guest (P2P).

Day 4. Cienfuegos – Depart Havana via the Autopista, lightly traveled main highway running the length of the island. In route we’ll stop near Matanzas at Australia to engage with engineers who maintain (P2P) a still functional steam train that serviced the former sugar mill. From here we make our way to (P2P the Guama crocodile breeding center to learn about ecology and conservation. Then ride along the coast to Playa Giron, (P2P), sight of the Bay of Pigs invasion, to visit the museum dedicated to the battle. Continue to Cienfuego. Dinner at El Lagarto then (P2P) enjoy a welcome reception and exchange with community members at a neighborhood Committee for the Defense of the Revolution (CDR).

Day 5. Trinidad – Ride to Trinidad, stopping en route at (P2P) the Botanical gardens for a guided walk; and the adjoining Pepito Tey former sugar processing community (P2P) for a fascinating exchange with historian Nancy Robaina about this American founded empire. On arriving Trinidad—the most authentic and complete Spanish Colonial town in the country—enjoy lunch. Then walk the colonial city accompanied by city historian (P2P) Nancy Benitez, including a visit with artist Lazaro Neiba (P2P) to learn about artistic creativity, expression, and training. Dinner at La Guitarra, where we’re joined by a Cuban guest (P2P). You’ll be encouraged to walk the cobblestone streets, follow the sounds to witness and participate in the passion of Cuban dance.  This town is probably, well deserving of two nights.  NOTE: Accommodations in Trinidad will be in casa particulares (P2P) home stays.

Day 6. Trinidad – Layover day. This morning gather with the local fire department (P2P). Then meet with entrepreneur Julio Munoz (P2P), Cuba’s “horse whisper,” to learn about his Proyecto Diana teaching humane equine training to Cubans. Lunch will be at Finca del Chino, allowing for interaction (P2P) with campesino (peasants). Mid-afternoon, ride to Tope de Collantes in the Sierra Escambray, and stop to visit (P2P) coffee growers along the way.  You’ll have dinner with our hosts (P2P) at the private homes, allowing for interaction to fulfill the people to people requirements. The town invites evening explorations. 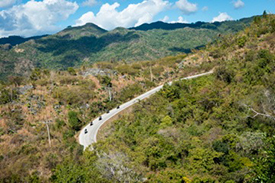 Day 7. Camaguey – Departing Trinidad we ride through Valle de los Ingenios, stopping at the (P2P) Hacienda Iznaga to engage with lace makers and conservationists involved in restoring the “Valley of the Sugar Mills.” We happen to know Cuba’s motocross champion; we’ll visit with him (P2P) in Sancti Spíritus to talk motorcycles! After lunch the ride takes us through Ciego de Ávila to Camagüey, where we’ll hop in “bicitaxis” (P2P) to engage with freelance taxistas while exploring the colonial city center. Then to the hotel, check in and invite local hunters to join us at Paladar 1800 for dinner (P2P) and share with the group the sport, conservation, gun ownership laws, etc. related to hunting in Cuba.

Day 8. Holguin – Departing the hotel we’ll stop in Minas at the violin factory (P2P) for an exchange on production of traditional musical instruments; then ride to San Basilio and join up with the cowboys (P2P) at Rancho King, where lunch will be served inviting the vaqueros to join us (P2P). Arriving our destination, we’ll settle in and be joined this evening by members of the local Harlista club (P2P), who proudly show off their pre-1959 motorcycles. 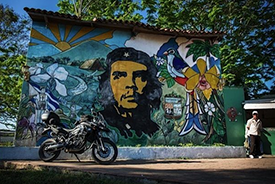 Day 9.  Baracoa – On the road to the far eastern tip of the island, an educational stop will be arranged at (P2P) Biran, birthplace of Fidel Castro. Then ride via Mella and Mensura to Salto de Mayari, high amid pine forests, where we’ll meet with environmentalist (P2P) and enjoy lunch. Continue to Parque Natural Alejandro Humboldt (P2P) for an exchange with park rangers. Dinner at a paladar (private restaurant), with a presentation (P2P) by city historian, Alejandro Hartman.

Day 10. Guantanamo – A brief exploration of town includes a stop for a chocolate fix and learning exchange (P2P) at the Casa de Chocolate and a meeting (P2P) with artists at the Casa de la Cultura. This region of Cuba is known for its unique legacy of pre-Columbian indigenous culture; we journey to the village of Guirito, where the indigenous community members (P2P) teach us the traditional music and dance known as Kiriba & Nengon. After lunch here, ride to Guantánamo via the La Farola switchback mountain road to meet with English-speaking Cubans and former U.S. Naval Base employees in the (P2P) British West Indies Welfare Center. Dinner followed by music and dance performance (P2P) with Tumba Francesca. 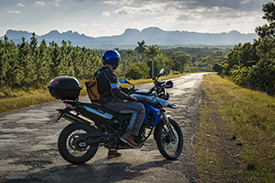 Cuban CountrySide on a GS

Day 11. Santiago – After breakfast the ride takes us to the site of (P2P) the famed Spanish American War battle of San Juan Hill, where we learn about this seminal event from a local historian and composer. We then explore (P2P) El Morro castle with a local guide. After lunch the group visits with Leonardo Matanzas and (P2P) his private motorcycle training school. After settling into our hotel we’ll be joined at dinner by (P2P) members of a local motorcycle club.

Day 12. Santiago – A presentation on the Afro Caribbean Santeria religion (P2P) by historian Carlos Lloga Dominquez will follow breakfast. Afterwards, specialists in revolutionary history will explain the key moments of the Cuban Revolution, launched at Moncada Barracks (P2P) in 1953; and the life of nationalist hero José Martí while visiting his mausoleum at the Cemetery Santa Ifigenia (P2P), where we also witness the changing of the guard. Ride to lunch, then to Parque Bacanao to visit with (P2P) artista Pedro Jorge Pozo and with (P2P) Santeria priest Gil Clemente Rios at El Oasis. The day’s people to people activities are wrapped up with a visit (P2P) to the Museo of the Cuban Spanish American War. A final dinner is sure to be a fiesta!

Day 13. Fly out to Miami – transfers to the airport for flight Santiago-Miami 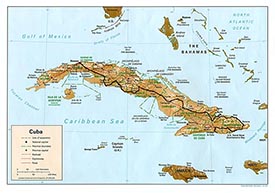 TERMS, CONDITIONS, etc.
• Reservations with deposits for the required minimum of 10 fully paid persons should be received by no later than 60 days prior to the tour date.
• Additional people may be added after this time based on ability to obtain visas and other circumstances.
• All participants must have a current passport with six month validity.
• A 1,500 Euro security/damage deposit is required when renting a motorcycle.

Participants will be advised on the regulations related to travel for US citizens and will be obligated to comply with OFAC rules concerning mandatory participation in scheduled people to people (P2P) activities.

Participants are required to sign statements of this understanding.

What do you think? Sounds pretty amazing right?! If you are seriously interested in joining us, email bob@bobsbmw.com for further discussion.

MotoDiscovery serves in the capacity of “advertiser” of Cuba travel, legally permitted as stated in USA Office of Foreign Assets Control Guidelines. Any travel to Cuba promoted by MotoDiscovery will be authorized and legal for USA citizens under the license held by Antilles TravelLLC. No. CT-2013-299634-1.