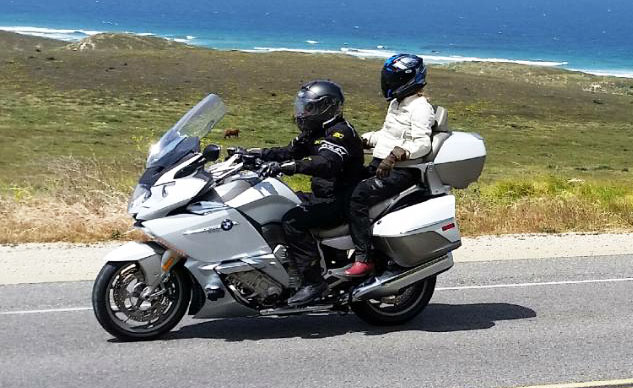 I was on the glorious Pacific Coast Highway aboard the new K1600GTL Exclusive when I had a thought that might be controversial. I imagined that Soichiro Honda, if given the choice, would prefer to be riding BMW’s new flagship rather than his eponymously named company’s iconic Gold Wing.

Let’s not forget that Mr. Honda’s company had a rich history with inline six-cylinder engines long before the Gold Wing’s flat-Six debuted in 1988. It was under Soichiro’s guidance the RC165 was shown to the Grand Prix paddock in 1965, a six-cylinder moonshot to battle two-stroke machines in the 250cc class. The shrieking 250/6 blew eardrums and minds but, unfortunately, handled poorly and was unreliable. Then, with input from the legendary Mike Hailwood, the RC166 earned 10 victories in 10 races and the 1966 world championship. And the 1967 title, too.

Eleven years later, the CBX streetbike was unleashed, a 1047cc six-cylinder machine that made indelible impressions in the minds of every gearhead. Six cylinders laying in a row across the frame had been seen in a production motorcycle only once before (the Benelli Sei, produced in limited quantities beginning in 1972), and the CBX’s cylinders spilling out the sides and 24 valves sitting under its massively wide twin-cam cover screamed motorcycle like nothing else. Then, in 1981, Honda transformed the CBX into a sport-touring machine, complete with a relatively large fairing and hard-shell luggage.

And it’s that same formula for BMW’s K1600 platform, of which the GTL Exclusive is the latest iteration. Except the K16’s 1649cc inline-Six benefits from an undersquare bore/stroke ratio and packaging innovation that significantly narrows the engine (21.9 inches, just 2 inches wider than the old K1300’s four-cylinder motor) relative to the CBX’s, allowing cornering clearance despite 63% extra displacement the Honda could only dream of.

052014-2012-BMW-K1600GTL-exclusive-engineSo, while riding the BMW Exclusive on twisty heaven in the Big Sur area, leaning it over further than any Gold Wing (Honda’s contemporary luxo-tourer and a legend in its own right), I was guessing Soichiro would prefer the sportier dynamics and heavenly exhaust song more than the dowdier Honda.

The K1600 platform has impressed us from the moment we first threw a leg over the luxurious GTL and sportier GT – both large but definitely in charge. Its tuneful exhaust note and incredibly agile handling redefined what’s possible with a plus-1600cc motorcycle. In our testing, the GT first knocked down Kawasaki’s much cheaper Concours 14, then the GTL dethroned the venerable Gold Wing. Either K16 is pricey, but their riding experiences are supreme.

While the GTL Exclusive will be sold in other markets, it’s built primarily for chrome-loving Americans. The Exclusive package also includes a unique color scheme based around four coats of Mineral White Metallic paint, the most expensive stuff from BMW’s car side. The luggage gets accents in Magnesium Metallic Matte, while the seat is a new Magnesium Silver color. The fuel tank is capped with a classy brushed-aluminum cover.

Also, exclusive to the Exclusive is a new seat that is wider and longer in the passenger section, as well as a heated upper backrest and additional padding in the lumbar area. A navigation unit is the only option, although the bike is prepped for the seamlessly integrated and fully featured unit ($800 approx.).

Keyless Ride is another innovation on the GTL-E, using a proximity sensor in the key fob to operate/activate the ignition, fuel-filler cap, steering lock, alarm and luggage locks. The central locking system automatically deactivates when the ignition is switched on, so the fob never needs to be removed from your pocket.

BMW says the GTL-E has the most comprehensive level of equipment and technology available in any motorcycle, although it has not yet received BMW’s Dynamic Damping Control as seen on the company’s HP4 sportbike. Regardless, its ESA II suspension system is quite advanced and performs flawlessly. Rear preload is electrically adjustable for various loads, while damping can be switched from the handlebar between Comfort, Normal and Sport settings that make a real difference in the levels of control. Its Normal setting would be fine on its own, but it’s satisfying to have the option to tailor the ride to road conditions: loosen it up while super-slabbing or firm it when sport riding.

Sport riding is encouraged by the GTL-E, despite its 793-pound curb weight. Keep in mind that mass is 100-150 pounds less than a Gold Wing or Harley-Davidson touring rigs. The biggest BMW snaps into corners with shocking alacrity for a giant luxo-tourer, and its cornering clearance is far greater than anything in its class. The GTL’s only dynamic flaw is an awkwardness at speeds below 10 mph, forcing a rider to be extra attentive when riding at a crawl.

Braking performance from the partially integrated ABS system is exemplary, with firm lever feel and astounding braking power for such a heavy motorcycle. While the rear brake is partially linked to the front lever, the rear brake pedal operates independently, which is our preference.

Passenger comfort was one of the only areas the GTL came up short to its competitors, but the GTL-E appreciably closes that gap. I brought my wife, Carolyn, for our ride from the Los Angeles basin to Monterey and back, and she was transported in regal comfort.

I’ve never had a better experience on a seat, even on the Gold Wing,” she raved, although it must be said she hasn’t yet sampled the pillion accommodations on Harley’s touring bikes. Wifey praised the extra security and comfort provided by the armrests and lauded the generous amount of legroom. “I didn’t have a problem with stiff knees like on some other bikes.” She also liked how the armrests could be flipped up to access the bike’s grabrails when I was riding more aggressively, although she noted the narrow apertures could be a tight squeeze for large hands. 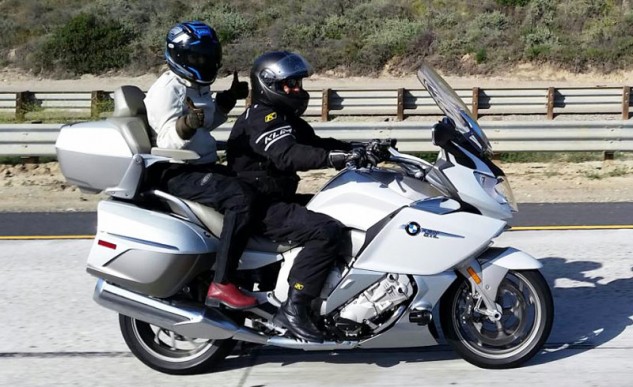 The K1600 GTL Exclusive’s passenger accommodations gets two thumbs up from Duke’s wife, Carolyn. “It’s a luxurious motorcycle ride,” she says. “And the heated seats; total bonus!” With the windshield in its uppermost position as seen here, airflow over both rider and passenger is smooth, with no annoying backpressure.

Despite the plethora of comfort and technology features, any K1600 experience is highlighted by one of the most impressive engines in motorcycling history. The wonderful inline-Six is dichotomous, stoutly delivering 70% of maximum torque at just 1500 rpm but also screaming to a glorious top-end howl reminiscent of a 1960s Jaguar or Aston Martin Le Mans racer. It entices a rider to rev it out just to hear it sing, becoming especially tuneful above 6000 rpm to its 8500-rpm redline, even though spinning it up isn’t required for a swift pace.

The first twist of a K16’s throttle reveals negligible flywheel effect, the engine gathering revs rapidly. Turns out the flywheel effect is low mostly because the K16 doesn’t use a flywheel, instead relying on the smoothness inherent of six cylinders located inline. The lack of crankshaft inertia initially made getting moving from a stop a delicate balancing act until I learned to feel the light-effort clutch bite before I added revs, dramatically simplifying smooth take-offs. Additionally, the GTL’s transmission, while not as seamless as a sportbike, is probably the best gearbox on any plus-1600cc engine.

The engine’s ride-by-wire throttle can be set to three modes: Rain, Road and Dynamic. I enjoyed the snappier responses of Dynamic, especially when riding at a sporting pace. But Road mode is better for two-up riding, as adding or subtracting throttle is less abrupt. Dynamic Traction Control adds a security blanket to throttle application, with settings applicable to each ride mode.

The GTL-E’s audio system features both satellite and AM/FM radio, plus iPhone/iPod and music player integration. Audio quality through the four cockpit speakers drops significantly above 65 mph, and the lack of rear speakers leaves passengers with only whiffs of music at highway speeds. Music fans would be wise to pipe tunes to a Bluetooth headset.

Props must be given to BMW’s Multi Controller wheel located inboard of the left handgrip. Most functions can be set or toggled through with simple turns or pushes on the disc. It’s a huge advancement in controlling many electronic gizmos.

I averaged mpg numbers in the high 30s during our trip. Those with less of a hooligan bent should be able to get at least 40 mpg, yielding 280 miles or more between fills of the 7.0-gallon tank.

There is no other bike that can offer the GTL-E’s opulent comfort cruising at 80 mph (with standard cruise control) on the highway while also being able to scream up PCH at a pace faster than some sportbikers. And, in case you were wondering, a slipper clutch on a luxo-tourer can be beneficial. A Gold Wing or H-D tourer is better coordinated at low speeds, but the GTL-E is dynamically tops in every other environment. Harley’s FL line falls short in every performance metric.

Interestingly, BMW says the GTL has converted many Harley owners, more than Gold Wing riders. The theory behind it supposes the K16 doesn’t contradict what Harley-Davidson does well.

While the K1600GTL Exclusive’s MSRP of $29,950 might frighten away the proletariat, it could seem like a bargain to a bar-and-shield devotee who just shelled out $38,999 for a CVO Limited. And I’ll bet Soichiro-san would like it, too.