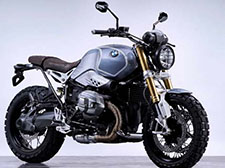 For anyone who has not seen the stock 2014 BMW R Nine T, Bob’s is pleased to announce we will have one on the showroom floor for an extended period of time. These models are coming and going as soon as they come out of the crates across the world, but thanks to a very generous customer at Bob’s, he has agreed to display his at Bob’s until he returns from his travels in a couple weeks at which time he will take delivery of this hard to get model. Odds are you will not have a chance like this again, so if you want to be one of the few that can say they have seen the R Nine T in person and to snap some pictures (she is very photogenic!), stop by Bob’s before its gone.

In other R Nine T news, iconic fashion brand, GANT Rugger recently unveiled the completely customized and modified version of the 2014 BMW R Nine T, known as the “Brooklyn Scrambler.” Only 6 are being produced and will be sold in dealerships throughout France. Read More>>