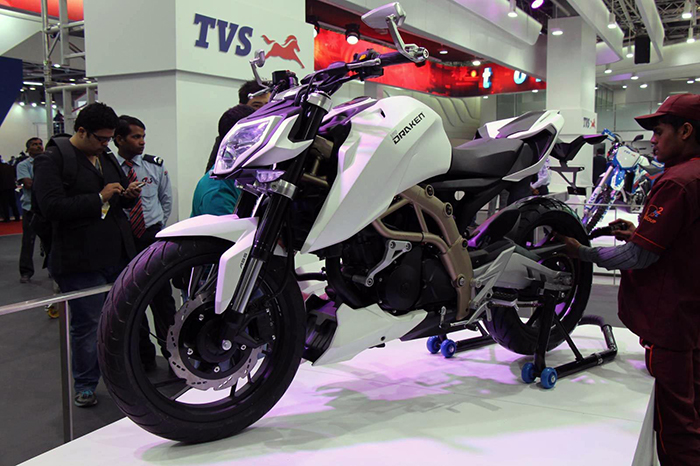 I had to check the date on when we last talked about BMW and TVS partnering up to build small-displacement motorcycles together, and it looks like it was almost exactly a year ago. In that timeframe, the two companies have been quietly working, but rumors have started to heat-up as to when we could see a sub-500cc BMW motorcycle.

A cynic’s response might be that BMW doesn’t want to be perceived as late to the small-displacement party, especially since its sub-500cc machines won’t be ready until Q3/Q4 of 2015.

With Honda, Kawasaki, and KTM already debuting their 250cc & 300cc models, and Yamaha & Triumph set to debut 250cc machines shortly, it seems the only manufacturer without a small-displacement offering either available or in the works is Ducati.

Focusing our attention back on BMW though, it seems the first BMW machine could be a rebadged TVS, with the Indian company recently showing its Draken concept (shown above), which features a 250cc single-cylinder engine that makes just under 40hp.

“I know we have been silent on the TVS (Motor Company) and BMW since we had the tie-up. (the first product) It is going to be ready by the second half of next calendar year. All the work is under progress,” said TVS Motor Company Chairman Venu Srinivasan.

BMW and TVS are expected to brand their co-built machines separately, and for different markets. The BMW-branded machines will come to Europe and North America, while the TVS machines will go to India, Asia, and other emerging markets.

With KTM’s partnership with Bajaj helping the Austrian company surpass BMW Motorrad as the largest European motorcycle manufacturer, the German company’s new line with TVS should reverse that trend.

Increasingly the future of the motorcycle industry is happening in India and Southeast Asia, and it seems like just about every manufacturer has some sort of strategy in place for that reality.