Looking Back at the 2013 Race Season 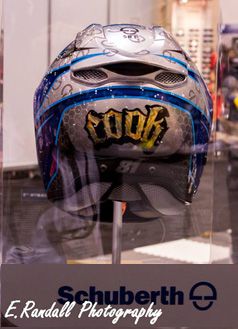 The race season is officially over and as winter sets in our Bob’s BMW Sponsored Racer, Jeremy Cook is already planning his comeback in 2014. With purchases like the HP Race ECU, HP Race Calibration Kit and a few other high performance modifications; Jeremy believes he will be able to produce winning results for the 2014 season.

The 2013 season proved to be a battle for Jeremy dealing with issues that many across our nation are also dealing with today like the sequestration, job loss and unpredictable financial stability but he still tried his best to stay focused and push forward. He did exceptionally well considering the personal struggles he had to overcome this season; still earning a 3rd Place in the AMA Grand Nationals at Virginia International Raceway along with multiple top ten finishes in most of the classes he races for the Championship Cup Series (CCS) and American Sportbike Racing Association (ASRA) Pro Series. The final event for the 2013 season took place at historic Daytona International Speedway back in October, The Race of Champions.

The event started out on Thursday’s practice losing two fellow racers/riders on the track due to an unfortunate situation that set a saddened mood across the paddock; a tough reality of the roadracing sport and many sports like it, where one seemingly insignificant mistake can have such a grave outcome. The next day (Friday), racers set out to practice again and Jeremy had one thing in mind and that was to safely find the correct gearing for the Bob’s BMW, Dead Presidents Racing S1000RR, which proved to be difficult being that there are many factors to consider when getting the correct gearing like: Are you at race pace? Are your tires new or old? Are you running the correct fuel? Are you following the correct line? Are you hitting the Rev Limiter on the banking? What gear are you dropping to in the “horseshoe”? It may seem like you can get out there and get a ball park gearing and do just fine but with Daytona that is not the case at all. Trying to find the correct gearing while not at race pace is a waste of time so first thing’s first, Jeremy got to race pace and in his case, once he got there he needed less gearing to open up more top end so he could obtain a higher MPH without hitting the rev limiter!

After Friday’s practice the team headed to Orlando for the Inaugural AIM Expo to meet up with Schuberth Helmets and debut the custom painted Schuberth SR-1 helmet done by Andrew Swenson Designs of Richmond, VA; the helmet is currently on display at Bob’s BMW. Saturday was the first race day and things were looking up as Jeremy placed 7th in the Expert Unlimited GTO (25min) National Championship race, losing out to AMA Superbike Racers Huntley Nash and Lloyd Bayley and AMA Supersport Star Stefano Mesa. This race showed Jeremy that the weekend of National Championship racing would not be an easy event as he looked at the races he had coming up all had top 10 top 15 AMA Racers racing in them; those in attendance: Nico Ferreira, Tim Bemisderfer, Jason Farrell, Bruno Silva, Felipe Maclean, Lloyd Bayley, Shane Turpin, and 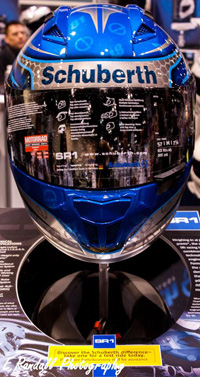 Although he didn’t walk away with any podium finishes he stated, “I feel like I learned a lot, I think in losing and struggling is when you learn the most, if everything was handed to you on a silver platter all the time how would you know to appreciate the winnings when they come? I mean I was able to watch some of the top privateers in roadracing go at it and in a few cases actually was able to battle with them myself. When they pulled away I watched their lines and listened to hear when they got on and off the gas. If you watch AMA, MotoGP or WSBK you always hear the announcers say well now that he got passed him he should just sit back behind him and go to school. That’s exactly what I did, I went to school. Who else can say they battled with Mark Heckles a former WSBK and BSB racers that raced with some of the greats like Troy Bayliss and Colin Edwards? I can! Daytona is a nightmare and a dream at the same time and I have been blessed to race there with some amazing talent, I can’t even describe the feeling of going almost 200MPH around the banking or what it’s like in slow motion to see Stefano Mesa come by you on the brakes into turn one sliding the rear tire to the point where it is squealing so loudly and when you swear he is going to high-side he drops the bike down to the ground and drags an elbow, it’s a beautiful thing.”

Jeremy plans to continue racing and depending on sponsorship responses and other factors he plans to race in the AMA for 2014. To help prepare for next season, he is planning to attend Colin Edwards’ Texas Tornado Boot-camp and any other classes he can.

Next year’s tentative CCS Schedule is already posted and everyone should try to make at least one event to cheer on our Bob’s BMW sponsored racer. Download schedule here.

The race bike and helmet will be in and out of the showroom throughout the winter so feel free to stop in to check it out and ask Jeremy questions if you see him. He will be at the DC International Motorcycle Show and the Timonium Motorcycle Show along with many other events at Bob’s in the coming months, when his race schedule permits.