Baltimore/Washington Ride for Kids had raises $140,043! 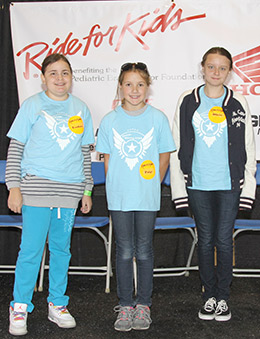 Theodora, Paige and Olivia at the Baltimore/Washington Ride for Kids

More than 350 people attended the ride, which started on a cool, cloudy morning at the Howard County Fairgrounds in West Friendship, Md. The event’s Stars were local brain tumor survivors Paige, Olivia, Theodora and Nicholas.

“When I first got involved there was little interest in pursuing a cure of pediatric brain tumors,” Johns Hopkins researcher Dr. Chetan Bettegowda told the motorcyclists. “Now as a direct result of the funds you all raise, there have been great strides in the treatments for this disease.”

Thank you to the dedicated volunteers who organized the event. The 2013 task force leaders were Tom Chicca and Marcy Rich.

We are still collecting online donations! Fundraisers will receive incentive credit through Oct. 22.