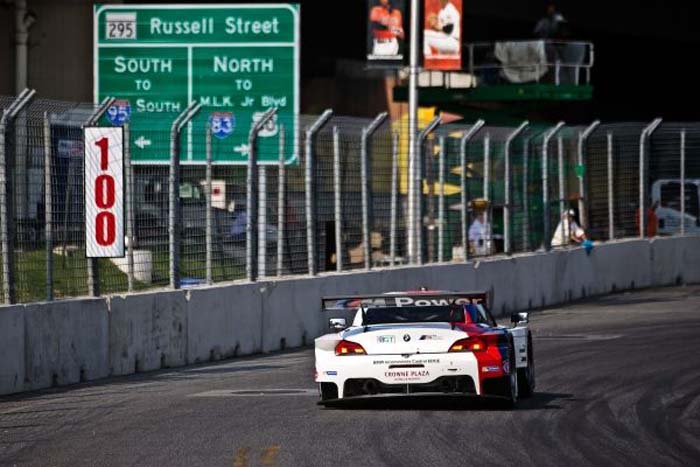 Woodcliff Lake, N.J. – Aug. 31, 2013 . . . BMW Team RLL finished third and fourth in today’s American Le Mans Series Grand Prix of Baltimore that will go into the record books as the shortest race in ALMS history due to a crash on the first lap that cost the event half of its duration.

The checkered flag flew only one-hour-and-fourteen-minutes after the green flag waved with Dirk Müller and Joey Hand finishing third in the No. 56 BMW Z4 GTE and the No. 55 machine of Bill Auberlen and Maxime Martin coming home fourth.

The crash occurred just after the green flag waved, blocking the circuit and involving eight cars. Polesitter Bill Auberlen, in the No. 55 Z4 GTE, just skirted by and Joey Hand, starting the No. 56 Z4 GTE from the 11th position, was able to stop the car untouched. The restart began with two laps behind the pace car and the always quick thinking Bobby Rahal called Hand into the pits immediately – sacrificing the Californian’s minimum drive time and points – to get Müller in the No. 56 right away. Hand may have set a record for the shortest drive in ALMS history, but the move put Müller in the lead and gave him the best chance to stay in the race for the driver’s title. Unfortunately, following the race’s last restart Müller was slowed by a prototype car that missed the line through the chicane and was passed by both Corvettes.

Bill Auberlen had a wild start in the No. 55 Z4 GTE and had a second near miss laps later, but kept the car clean before handing off to Martin after five laps. The Belgian raced as high as second before losing the rear bumper of the car and bringing out a yellow flag. He slipped to fourth in the closing stages of the race.

Unofficially, BMW still stands second in the GT class Manufacturer’s championship and Müller now is fifth is the driver’s title chase, behind both pairs of Corvette drivers, but all are only separated by a scant eight points.

“It seemed like amateur night,” said Bobby Rahal, Team Principal. “I’m very frustrated. We had a perfect plan and were leading the race. On the last restart a prototype car totally cocked up the chicane and Dirk nearly hit it. He was held up enough for the Corvettes to get by and that was that.”

“We knew this weekend would be rough and tough,” said Gordon McDonnell, BMWNA Motorsport Manager. “We thought the Z4 GTE would be extremely well-suited to this course and we saw that in qualifying. The race seemed to have a mind of its own and we were along for the ride. I’m really proud of the guys for keeping their heads down. They fought really hard and 3rd and 4th is a great result to leave this race with.”

Joey Hand, driver No. 56 Z4 GTE – (3rd) – “We’ll take a third-place but we’re not as excited as we would have been. Dirk did a good job but got unlucky during that restart with the traffic. But that’s what endurance racing is all about. I love racing and came here to race, but today I had to be a team player and get out of the car early. It was just a unique race, to say the least.”

Dirk Müller, driver No. 56 Z4 GTE – (3rd) – “What a race. What a strategy! We pitted early went from dead last, after yesterday’s penalty, all the way up to the front. I had the pace, and the car was strong. On the last restart I was fully prepared but everybody ahead checked up and I had to apply emergency braking into the chicane. Basically the two Corvettes just took advantage of it. Once behind them I was quicker, and was able to close the gap somewhat, but P3 is more than I was hoping for overnight. I’m really happy. There is still a ways to go in the championship; we are getting stronger and stronger. This result was a team effort.”

Bill Auberlen, driver No. 55 Z4 GTE – (4th) – “The team was poised for a 1-2 finish today, but it seemed most of the field came to crash instead of race. I’ve already had a double victory at the Circuit of the Americas this season in the GRAND-AM series driving BMWs so I’ll put today behind us and focus forward to Round Eight.”

Maxime Martin, driver No. 55 Z4 GTE – (4th) – “This certainly was a strange race; very short with no pit stops. We started quite okay but in a little crash I lost two places and the rear bumper, so in the end we weren’t quick enough to stay with the front pack. We are scoring points, but we could have had a much better day.”