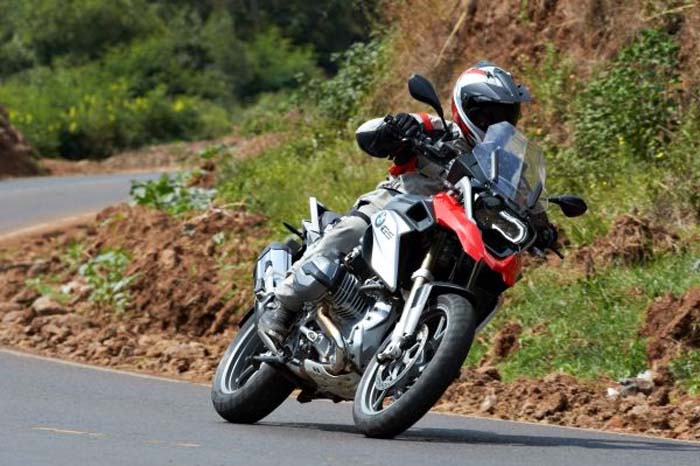 “Continually raising the bar for performance, safety and technology has both risks and rewards,” observed Hans Blesse, Vice President, BMW Motorrad USA. “Receiving “Best Of” awards in six categories is clearly rewarding for everyone involved in bringing these new models to market.”

“The R 1200 GS in its previous form was not only a class leader, it had also become an icon in the motorcycle world and was the de facto bike of choice for far-flung adventures, making it also a leading choice among those whose escapades occur much closer to home,” wrote editors of Motorcycle.com. “So when it was revealed that the next GS would contain no parts of the older Gelande Strasse, GS-ophiles held their collective breath, fearing BMW might lose the plot with its new-from-the-ground-up replacement, including its new liquid-cooled Boxer engine. Dread was unnecessary, as BMW has knocked it out of the park with its wasser-Boxer…For its vast scope of capabilities in a ruggedly handsome package, it’s difficult to imagine a better one-bike-in-the-garage choice. And for these reasons, BMW’s R1200GS earns our Motorcycle of the Year award.”

Of the R 1200 GS’s dual honor as “Best Off-Road/Adventure Motorcycle,” Motorcycle.com wrote, “Despite all its newness, the BMW managed to maintain the balance of off- and on-road qualities that’s kept the GS as the benchmark in this category for so long…The R1200GS is the Swiss Army Knife of motorcycling – there is almost nothing it can’t do…But in 2013, no other motorcycle can match the GS’s incredible versatility and its horizon-stretching capabilities.

Commenting on their selection of BMW’s HP4 as the “Best Sportbike” for 2013, Motorcycle.com editors wrote, “When you take the winner of this category last year, the BMW S1000RR, and make it even better by putting it on a diet, enhancing the software for better lap times, and add an electronic suspension that adjusts itself automatically, then it’s no wonder the HP4 is our 2013 Sportbike of the Year.”

The 2013 HP4 provides uncompromising power with an output of 193 bhp and a maximum torque of 83 lb/ft. It features the world’s first dynamic suspension system DDC (Dynamic Damping Control), which automatically adapts the suspension damping to the situation at hand (Rain and Sport for public roads, Race and Slick for the race track).

“The BMW K1600GTL has owned the Best Touring category since its introduction, and as of yet no OEM has been able to dethrone the amazingly capable Beemer,” says Motorcycle.com. “No matter which model, GT or GTL, a person purchases, you’ll be riding the best two-wheel touring motorcycle money can buy.”

Of their selection of BMW’s C600/650 GT as the “Best Scooters for 2013,” Motorcycle.com editors remarked, “It’s not often you’ll hear us say we were blown away by a scooter, but BMW’s C600/650 is not your average scoot. There’s nearly 600 pounds rolling on 15-inch wheels, but you’d never know it. The C-model scooters from BMW handle everything from twisty canyon roads to freeway commuting, but then ride either to the local supermarket and a week’s worth of frozen pizzas fit neatly in the under-seat storage.”

“It’s a rare event when the introduction of a new feature to motorcycling results in a paradigm shift of what’s possible, but the roll-out of semi-active suspension among several European manufacturers is an advancement that changes how we think about wheel control,” says Motorcycle.com. “Our first taste came during BMW’s HP4 launch last September at the Jerez circuit in Spain… More comfort when you want it, and more control when you need it, it performed automatically and without thought or action from a rider. Once you try it, you’ll never want to go back.”

Following are links to BMW Motorrad press material on: