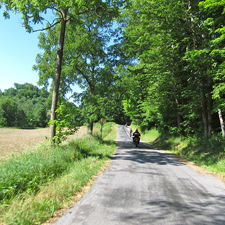 Day One:
There was a big storm hammering up the east coast and as if on some sort of spiteful mission to ruin my plan of taking the long, twisty way…. it started dumping buckets as I was packing up my bike to leave on a long ride. Undaunted and wrapped in every bit of rain gear I own, I scrapped my sunny day route from North Baltimore to the Woodward Cave campsite in Mifflinburg Pennsylvania and begrudgingly hit the boring but more direct highway route. The first few hours were a forgettable blur of low visibility and moderately heavy traffic, but as I made it just north of Harrisburg PA and started heading west on 322 the rain and traffic lightened up and I was able to complete the rest of the ride without stress or incident.

A few well marked turns off the highway took me through some scenic backroads and directly to the campsite where I was greeted by Nancy from AltRider who was setting up the registration tent and handling the rider sign in. I parked my bike, shed my damp gear and hung out in the pavilion to have a snack and decompress.

I was a little bummed that I was too tired to ride to the EnduroCross expo/ race (featuring legendary Dakar Race Champ Jimmy Lewis as well as several other extremely talented ISDE riders!) which was being held a few miles up the road, but I was equally happy to stroll around, chat with some fellow riders and set up my camp.

At around 7pm there was a keg full of deliciously dark beer flowing and at 8pm a phenomenal dinner of smoked chicken, spinach, mac and cheese and salad was thoroughly enjoyed by all. After dinner there was an informal rider meeting where we were encouraged to team up in small groups based on skill level and sign up for the appropriate routes. As I was hoping to spend most of my ride time relaxing, stopping frequently and taking lots of pictures, I passed on the advanced and intermediate sheets and signed up for what was very tactfully described as the “scenic ride” group. Little did I know just how brilliant a move that would turn out to be…. 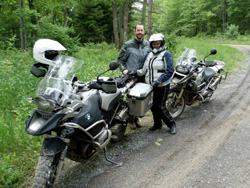 Day Two:
Woke up early and delighted over clearer skies and absolutely perfect weather. After a hearty breakfast of fresh fruit, granola bars, bacon, eggs and cheese covered potatoes, the 70+ participants were summoned to the pre ride meeting where Jeremy from AltRider. We went over some rider safety pointers, trail rules and a few basic off road riding tips. We then separated into our skill based groups which were then sent out at appropriate time intervals to avoid getting bunched up on the trails.

The scenic group consisted of two husband and wife teams, Stephanie and Brooks and Kristin and Ryan, as well as Ryan’s brother Sean and yours truly, Colin. The skill level of our little group ranged from “I’m lazy and in no hurry” world traveler to “I’ve NEVER ridden off road” MSF instructor, so before we left we collectively shared a few pointers and reviewed some basic off road riding techniques. The most important thing we covered and all unanimously agreed upon is that we would go slow, stop as often as we wanted, help each other as much as needed and have as much fun as possible along the way.

And we were off. The first section was muddy as hell from the rain the day prior (It was so slippery that when I asked Jimmy Lewis about it at dinner later that night he described it as “unnerving peanut butter…”), but the proudly self-titled Team Turtle did what we set out to do: we took it slow and steady and made it through without a hitch. After 30 minutes or so of moto slip and slide, the slimy muck gave way to wonderfully groomed and well packed gravel trails, some interestingly challenging big, chunky, rocky downhill sections punctuated by sweeping curves and breathtaking scenery at all of the many overlooks. An hour or so in Team Turtle took our gained confidence and picked up the pace by a few MPH, but always took time to stop and smell the honeysuckle and pine.

There were a few minor oopsies along the way involving a dropped bike here and there, but the incidents were always handled by some quick teamwork followed by genuine encouragement to keep riding and, most importantly, keep smiling. The absolute stars of the show were Stephanie, who after only half a day of instruction took her BMW R1200GS Adventure to places that most experienced trail riders only dream of and Kristen, who after only a few minutes of the most basic pointers that morning was making light work of the roughest terrain with seemingly effortless aplomb. 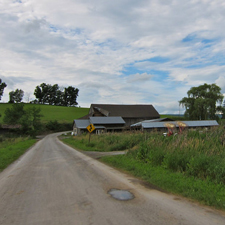 At the approximate half way point of the ride, all the riders converged from their various routes and had a lunch of chicken or beef wraps, fresh salad, tons of fruit and lots of Gatorade and water at a State Forest picnic pavilion. During lunch some riders from other skill groups were asking around about “those guys from Team Turtle who are going slow, goofing off and having fun…”. As it turned out there were a few riders who felt they were in a little over their heads in the groups they chose to ride with, so after lunch Team Turtle nearly doubled in size! We broke up into two smaller packs and started out around five minutes apart, but when we all arrived back at the campsite for dinner that evening we all reconvened and cheerfully recounted the endless fun we all had along the way.

When all was said and done, riding with the scenic group allowed me to have a relaxing ride and stop to take in the sights and such, but more importantly, it allowed me to share in what I believe is the most important aspect of motorcycling: the unbridled joy of sharing good times with fellow riders. If giggling like a bunch of silly kids about the ride was the mission, we surely accomplished it that day!

After delicious whole roast pig dinner there was a prize ceremony, during which both Stephanie and Kristen were officially recognized by the folks at AltRider for their achievements in the area of “press on with a smile” and awarded with door prizes (well…. actually…….Kristen was more recognized for an incident involving an Amish family who witnessed the untimely end of one of their chickens that was crossing the road at the wrong moment in time, but that’s another story for another day…..).

After everyone settled down a bit and the second keg was tapped, the one and only Jimmy Lewis took the stage for a very down to earth and insightful audio visual overview of how an “average joe” managed to make his way to the top and leave an indelible mark on the world of hardcore, world class enduro racing. Everyone was pretty well worn from a day of excellent riding, so after an open floor, info packed Q&A session with Jimmy, it got pretty quiet very quickly and we all slept like…. well… like we had been riding off road all day then got stuffed with amazing food and beer!

Day Three:
All good things must come to an end, but when they do, sunshine and clear blue skies take the sting away and make us all look forward to next time! I spent the early morning wandering around the site saying goodbyes and trading email contact info with some great new friends. I packed up camp, threw everything on the bike and easily made my way home with a giant smile on my face knowing that the past weekend was only the beginning of many fun adventures for Team Turtle………..

Bottom line: Conserve the Ride 2013 was brilliantly organized, incredibly well planned, everyone in attendance of all skill levels had lots and lots of fun. Many thanks to the fine folks at AltRider for hosting and promoting such a fun and enjoyable event.

Especially big Kudos to the Seven Mountains Conservation Corps for not only mapping and pre-riding the routes, but also for running sweep rides on all the courses throughout the day to make sure everyone was having a safe, enjoyable time.!
See you all next year!