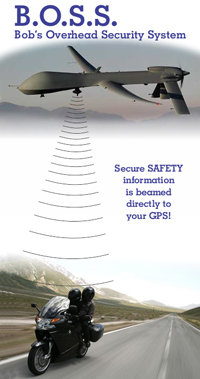 It’s a new high-tech safety solution that offers a multitude of enhanced safe-riding benefits exclusively for Bob’s customers who enroll in our great program!

It turns out that being the most prominent BMW dealership in the Washington DC area’s has its advantages!

In partnership with the U.S. Military at nearby Fort Meade, and the National Security Agency (NSA), whose top secret facility is only three miles from our dealership, Bob’s BMW has developed an amazingly effective peace time use for unmanned reconnaissance aircraft – or “drones.” These small, remote controlled aircraft are bristling with the latest high-resolution cameras, surveillance sensors, and listening devices. (We’re told to rest assured that they’re unarmed!) And now, Bob’s has a dedicated fleet of them whose sole purpose will be to circulate nationwide as our friendly, though unseen, “Eyes in the Sky!”

Imagine the peace of mind you’ll have knowing that our friendly drones are in the air at all times acting on your behalf. Yes, every time you ride, you’ll know that we’ve got your back!

By constantly monitoring travel conditions on the ground – to a degree of precision never before thought possible – the B.O.S.S. drone fleet will take the “guesswork” out of motorcycle riding by keeping track of constantly changing traffic and road conditions, as well as alerting you to the exact location of such dangers as severe storms, roads under construction, accidents, official checkpoints, and other police activity. You’ll even know where the potholes are – BEFORE you see them!

How does B.O.S.S. work? EASY! If you have had a BMW Nav IV or Garmin GPS unit installed on your bike at Bob’s in the last two years, or even if you bought it from Bob’s and installed it yourself, you are ALREADY “PLUGGED IN” to our surveillance system! That’s right, our Eyes in the Sky already know where you are – and WHO you are! But whether you have a GPS now or are planning on buying one soon, you’ll need to enroll in our program in order to actually utilize the benefits of this technology. Because when you’re a member of our Early Warning Safety Program, all the specific information you need to ride safely in today’s increasingly hostile traffic environment is delivered right to your on-board GPS unit – in real time as you ride!

How much, you ask? You’ll be AMAZED to learn that membership in Bob’s Overhead Security System is completely affordable.

Sign up for our Standard Early Warning Security Package, which includes all the incredible features described above, and you pay an unbelievably low…
$89.99 per month!

But that’s not all. Sign up for the Deluxe Early Warning Security Package and you’ll have the added peace of mind of being able to track the exact location of your family and friends at all times — PLUS you’ll be warned IN ADVANCE of potential “threats” such as mass political protests, undisclosed armaments in the hands of unfriendly militant groups, the presence of unauthorized chemical or biological weapons, and even clandestine meetings of known or extremist political organizations and anti-American subversives such as the A.C.L.U., all for only…
$119.99 per month!

Now you, as a Bob’s BMW Rider, can travel anywhere in these United States knowing that B.O.S.S. technology is at work to guarantee your Riding Pleasure!