A fleet of all-new water-cooled BMW R1200RTs have been spied carrying out road testing in the South of France ahead of the launch of the completely new bike in 2014.

The R1200RT is the current best-selling tourer in the UK but will be replaced next year and use the same all-new water-cooled 125bhp motor from the recently launched BMW R1200GS adventure bike.

The GS was completely re-engineered with not just a new boxer engine but also a new chassis and a single-sided swingarm, shaft drive and exhaust system.

Four new bikes have been spotted testing in France – handily the BMW test team opted to cover the bikes in garish black and white swirly decals which meant they were easily seen. If they had just been painted black it’s highly doubtful anyone would have noticed! 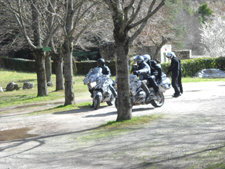 Spy shot of the BMW R1200RT[/caption]We can see from the images they bike has the new engine from the GS along with the swingarm and shaft drive unchanged. The exhaust has a different silencer to the GS but this may not be the fully-finished production version.

The front shots show the bikes have fitted, at least as an option, the adaptive headlights from the BMW K1600GT model which adjust the level and actually tilt with the bike as it corners to give a longer view up the road while the bike is leant over.

The front fairing is modified too with new plastics around the new lights. The side panels have new air-ducts which are sited next to the new twin radiators which are now an integral part of the cooling of the new engine.