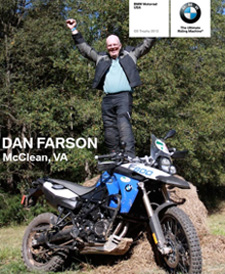 Congratulations to customer and friend, Dan Farson of McLean, VA who took first place in the East Coast qualifying round of the 2012 BMW GS Trophy event held in Spartenburg, South Carolina September 21-23. Six finalists were chosen from the East Coast (another 6 from the West Coast) based on a series of competitions held over 3 days. The next round is scheduled for November in South America where 19 countries will compete for the 2012 GS Trophy.

In order to secure one of the spots on the USA Team finalists have been entered into an online competition through BMW Motorrad USA.

This is where Bob’s BMW and Mr. Dan Farson need our e-club members help! With 2 very simple and quick clicks of a button, you can help Dan become one of the elite GS riders representing not only the USA but Bob’s BMW! How cool is that?! Simply click HERE and vote for DAN FARSON.

Before you vote for Dan, you may be asking yourself, well who is Dan Farson? Well what makes this story even cooler is when you close your eyes and think of a GS rider, you probably envision a 30 something year old, not a man that just retired from the US Navy after 35 years of active duty!

Between May and September of 2010 Dan was able to get about 2,000 miles on the F800 before being sent to Tripoli, Libya to serve as the US Defense Attache. He made arrangements to ship the bike and finally it arrived to Tripoli in January 2011. Unfortunately by the time, the Libyan government was able to issue a plate, the revolution had kicked off and before he had a chance to ride it there, he and his family were evacuated, and he were forced to leave the motorcycle in Tripoli. Finally in May 2012 the bike was returned to Dan and he was able to get back on it with just enough time to reacquaint himself with the bike for the GS Trophy event!

To get more details of what Dan went through over the 3 day competition, you can visit BMW Motorrad

But most importantly we want to be sure that the #1 East Coast Finalist makes it onto the USA Team and represents in South America in November…he clearly earned his spot placing #1 among 40 something other participants! To ensure Dan proceeds to the next round please visit the below link and…