Kurt Motta of Falmouth, Massachusetts is a long time Bob’s customer of about 10-12 years who became familiar with Bob’s BMW through seeing our monthly ads in BMWMOA. After attending a few rallies and speaking to several MOA members who knew Bob personally and spoke highly of him, he began ordering parts from Bob’s such as clutch cables, brake switches, replacement horns, and other “parts to keep a 30 year old bike up and running.” 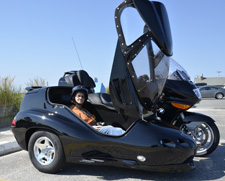 A view of the sidecar

In 1999 Kurt and his wife journeyed to the BMWMOA national rally in Rhinebeck and “between all the heat before and during the rally, sleeping on the ground for 4 days and a 5 hour ride led my wife to announce she could not do it anymore.” It was at this point Kurt began researching sidecars. New to the sidecar world, Kurt decided to start with a Velorex 700s and attached it to his R75/6.

Some years later, retirement began to approach. Kurt was not going to be able to retire as planned, but he and his wife both agreed he deserved his retirement present. And what better gift than a motorcycle?! Originally Kurt always saw himself on an R1200RT but decided after 36
years of riding nothing but twins “if you are going to make a change it might as well be a big one,” so he decided the K1600 was in the running. The K1600 quickly fell out of the running when Kurt discovered the reverse had been removed. So the answer was a K1200LT combined with either a Hannigan Astro 2+2 or the GTL sidecar.

Kurt set up his first R75/6 sidecar rig himself, working closely with the shop he purchased the rig from. For his current project, Kurt reached back out to the shop that guided him through the R75/6 sidecar set up as well as Bob’s BMW. Based on Bob’s BMW reputation and the fact that we had access to all the resources needed to put his rig together such as a tug to attach the sidecar, Kurt chose to move forward with Bob’s.

Salesman, Carter Melbourne promptly responded in assisting Kurt in the purchase of a low mileage 2009 K1200LT. As soon as the paperwork on the 2009 K1200LT was complete, Carter turned Kurt over to Bob’s Service Manager, Chris Buell, to begin the next phase of the project: converting this luxury touring motorcycle to an even more luxurious motorcycle…a sidecar rig!

Kurt chose the GTL sidecar and after patiently waiting close to 2 months for Hannigan to build and deliver the sidecar (these units are built to order so average time is around 2months; which is a prime reason why these projects are best initiated during the winter months!), it arrived and Master Technician Brett Ricketts immediately dove into the project and had it ready for transport to Kurt in TWO days! On average complete installs take Bob’s Service Department one-two weeks but with it being riding season, we pushed hard to get the bike in the customer’s hands as soon as possible. Projects like these do not happen over-night folks, in fact average time on a sidecar conversion is approximately 3 months between the build of the rig and installation. Kurt states, “a long process to be sure but a very rewarding one.”

Upon completion of the bike, delivery arrangements were immediately made and the sidecar rig safely arrived in Massachusetts, was unloaded, and within 20 short minutes Kurt and his wife had mounted the bike for a short ride just before having to get to work. Since delivery earlier this month, Kurt has put 1,300 great miles on it! Kurt sums up the experience of purchasing a bike hundreds of miles from home best, stating, “Anyone who thinks a project like this can be pulled off without a hiccup or two is delusional. It is the reaction to those hiccups that counts and Bob’s employees reacted well!”

Living hundreds of miles away, Kurt had never ridden the 2009 K1200LT, let alone sat on it. After putting some miles on the bike, Kurt contacted Bob’s with a couple concerns. The highway peg and passenger peg could not be deployed because of the sidecar. The highway peg is not a stock part on the K1200LT, it is an added accessory by the original owner, plus Kurt acknowledged the fact that “your feet belong on the pegs by the controls” so really this was a non-issue. As for the passenger peg, Bob suggested either removing it altogether, replacing it with a smaller peg, or to keep it as is in the closed position. Kurt decided “if there is ever a passenger sitting behind me it is going to be an emergency situation that will over rule the safety issues involved in a pillion passenger on a sidecar rig,” so again really a non-issue and keep it as is. The real issues were two: having not sat on the bike prior to purchase, he soon realized the seat was not best suited for his 34 inch inseam. Bob’s always recommends test rides to our customers to ensure the bike suits your build. Unfortunately being hundreds of miles away, Kurt was unable to test ride the bike. Luckily now that the bike is in his possession, he can take it to a local business to have a seat custom fabricated to meet his specific needs. Finally the chin spoiler in the front of the sidecar measures about 4-3/4 inches from the ground making some driveways a bit of a challenge. This is how Hannigan builds this particular rig so although we cannot adjust it we certainly passed the feedback along to Hannigan to consider in future builds. We are happy Kurt identified this early on so he is conscientious of the low end when entering and exiting driveways. And thanks to Kurt, we can mention this to our future customers to take into consideration when looking at the GTL sidecar.

We look forward to the day Kurt and his wife decide to put more miles on the sidecar rig and ride it down to Bob’s BMW to meet the team that helped make their dreams come true!

Fun in the Sidecar!

Installations, conversions, restorations, and other similar projects take time. Kurt’s story is a prime example that whether you are near or far from Jessup, MD, does not matter. In fact Kurt has never even been to Bob’s! What matters is that the team you work with is responsive and stays in close communication with you along the way like Bob’s team did.

It is also important to recognize the time these projects take. Although Bob’s part of the process may be able to be knocked out in a couple weeks, there is build time, delivery/transport, and just those good old fashion surprises that always seem to show their ugly heads, that need to be taken in consideration. This is why Bob’s encourages projects to be scheduled over the winter months, so that you don’t find your bike on a lift on a sunny 70 degree day!

Kurt’s sidecar conversion turned out beautifully and Bob’s thanks Kurt for the opportunity to take part in the build of such a head-turning piece of machinery!