In 2010, a tradition as old as most of the motorcycles involved was revived. Riders traveling on motorcycles built before 1916 traveled from coast to coast of the United States of America, starting in New York and ending in San Francisco. Two years later, in 2012, another run was organized, only this time for motorcycles pre-1930 which allowed BMW’s to enter the race!. These “Cannonball Endurance Runs” were inspired by E.G. Baker, also known as “Cannonball.” 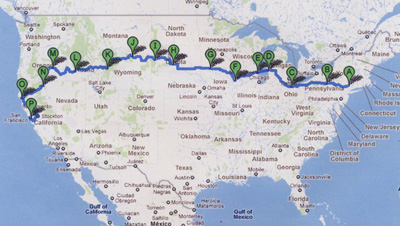 Baker worked as the Superintendent of a motorcycling tire testing department in the early 1900’s. At this job, Baker completed fast, long distance rides and was able to do so without experiencing fatigue like most others who were unable to keep up with his pace.

In 1912, he completed his first endurance ride on a 2-speed Indian traveling 14,000 miles in three months from Florida to Cuba, to Jamaica, and then to Panama. After finishing this ride, Baker decided it was time to attempt to break the transcontinental record. In 1913 he rode a 7 hp, 2-speed electric model twin Indian. He covered 3,378 miles in 11 days, 12 hours, and 10 minutes earning him the nickname “Cannonball.” According to reports, “Cannonball” Baker completed 140 timed long distance rides; 126 which were coast to coast.

Which brings us back to 2010 when a group of motorcycle enthusiasts decided it was time to invite all makes and models of motorcycles built before 1916 to gather and partake in an “epic adventure of man and machine.” Riders averaged 300 miles a day and traveled with crews on routes through national parks, along great lakes, rivers, mountain ranges, and more. This was an endurance run where one rider and one machine would claim victory. Unfortunately for BMW enthusiasts, the race was not open to BMW’s as the first BMW was not built until 1923.

Team 62 is made up of 3 individuals: Rider, Joe Gimpel, and his long time friend and another handy person that Joe has known and worked with. More details on this team are available at http://www.motorcyclecannonball.com/index.php?option=com_sobipro&pid=55&sid=130:62-Joseph-Gimpel&Itemid=109

Team 52, also known as Team Boxer Rebellion has dozens of sponsors and support. A full list is available at http://darryl.crafty-fox.com/ and/or you can get ride reports and details on this team.

On September 7, 2012 70 total riders on Harley Davidson’s, BSA’s, Triumphs, Henderson’s, Indians, BMW’s, Rudge’s, and a Velocette, Invinvcible JAP, and Sunbeam started a 2-week journey coast to coast across the United States riding motorcycles built before 1930. The ride started in New York and will end in San Francisco. Most days are 300 miles or less, with shorter distances on the start and finish days. It is a scenic route, avoiding interstate highways, with stopping points at museums and hosted lunch stops.

Bob’s BMW salutes the BMW teams for their determination and enthusiasm. Traveling coast to coast on vintage and classic bikes is sure to be a challenge but we know if any brand can do it, it’s BMW! Perhaps next year, a Bob’s BMW ambassador can represent on one of Bob’s personal machines in his museum, or even better, maybe Bob himself will join the next Cannonball Endurance Race!