The CCS racing season is coming to an end and points are being tallied. Bob’s BMW could not be any more proud to report that our sponsored racer, Jeremy Cook not only won the 2012 Atlantic Region Unlimited Supersport Championship, he also got third place podium finishes in the other three classes he races: Unlimited Superbike, Unlimited Grand Prix (GP), and Unlimited GTO (25 min. races)! Overall in the Atlantic Region among all 264 racers (all classes, any bike size), he finished in the Top 10…#7! 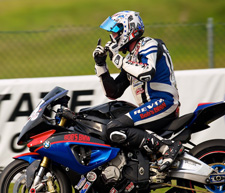 This is Jeremy’s first year racing expert and only his second year of competitive road-racing! He races a 2009 BMW S1000RR body with a 2012 engine supersport/superstock built by Larry Pegram. The Atlantic region covers all of the tracks from Loudon, New Hampshire to Roebling Road, Georgia. He was unable to attend the New Hampshire event due to a conflict in schedule and still managed to finish on the podium in all four classes he races!

Results for the Mid-Atlantic Region are not yet in but are being tallied in full now that this past weekend’s race at Virginia International Raceway is complete.

Jeremy was a radio guest on sidestandup.com on September 11 where he reported the highlights of his season and plans for next year. You can download this 5 minute interview HERE (to hear Jeremy, fast forward to 52 minutes, 20 seconds).

Pictures from the 2012 season are available on Bob’s facebook fan page. There are no more “home” races this year, but next year Bob’s encourages you to join us at a Summit Point Race Track for fun-filled days at the track to help us cheer on our sponsored racer who is well on his way to the big league!