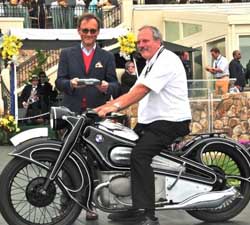 The BMW R7 motorcycle won best-in-class in the Motorcycle class at the 2012 Pebble Beach Concours d’Elegance. The award was received by Karl Baumer, Head of BMW Group Classic.

“The BMW R7 is one of the most extraordinary motorcycles in our collection,” noted Baumer upon receiving the award. “We are delighted that the effort to bring the BMW R7 to the Pebble Beach Concours was rewarded with Best in Class for Motorcycles.”

The 2012 Pebble Beach Concours d’Elegance featured motorcycles from Germany. On the cusp of its 90th year of motorcycle production it was only natural that BMW would feature prominently.
The BMW R7 motorcycle was created in 1934 at the height of the art deco movement which heavily influenced its design. It was created as a concept but never put into production making this R7 the only one of its kind in the world. It had not been seen for nearly 70 years when it was discovered in 2005 whereupon it was painstakingly restored by BMW Group Classic. It is now a part of BMW Group Classic’s extensive collection of significant BMW cars and motorcycles.

BMW Group In America
BMW of North America, LLC has been present in the United States since 1975. Rolls-Royce Motor Cars NA, LLC began distributing vehicles in 2003. The BMW Group in the United States has grown to include marketing, sales, and financial service organizations for the BMW brand of motor vehicles, including motorcycles, the MINI brand, and the Rolls-Royce brand of Motor Cars; DesignworksUSA, a strategic design consultancy in California; a technology office in Silicon Valley and various other operations throughout the country. BMW Manufacturing Co., LLC in South Carolina is part of BMW Group’s global manufacturing network and is the exclusive manufacturing plant for all X5 and X3 Sports Activity Vehicles and X6 Sports Activity Coupes. The BMW Group sales organization is represented in the U.S. through networks of 338 BMW passenger car and BMW Sports Activity Vehicle centers, 139 BMW motorcycle retailers, 114 MINI passenger car dealers, and 32 Rolls-Royce Motor Car dealers. BMW (US) Holding Corp., the BMW Group’s sales headquarters for North America, is located in Woodcliff Lake, New Jersey.

Information about BMW Group products is available to consumers via the Internet at: www.bmwgroupna.com.