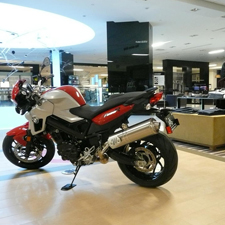 Tuesday, August 14 select dealers nationwide, including Bob’s BMW, rolled BMW’s on the showroom floor of Bloomingdale’s. Bob personally delivered an F800R to the Bloomingdale’s in Chevy Chase, MD. Bloomingdale’s decided a BMW motorcycle is the perfect accessory to show off its 2012 Men’s Fall Fashion; after all the BMW roundel is known for its quality, design, and performance—very similar to Bloomingdale’s brand image.

The men’s fall fashion catalog has been released in which the motorcycle is featured. Plus, Bloomingdale’s is running a sweepstakes now thru September 16 giving away two R1200R Classics, one of the hardest models in the country to get today. And our very good friend Chris “Teach” McNeil will perform on 3rd avenue in front of the New York Bloomingdale’s to help kick off the infamous fashion week!

Bob’s addition to Bloomingdale’s sweepstakes…if you find yourself at the Chevy Chase Bloomingdale’s, have some fun and snap a picture in front of the bike, EMAIL it to us, and if your picture is chosen by the staff as the most creative, win a Bob’s hoodie…the perfect prize for the cooler weather around the corner!