Ride for a Great Cause—Ride for Kids® 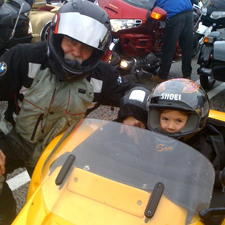 Every year Pediatric Brain Tumor Foundation® (PBTF) hosts events around the country in an effort to raise money and raise hope for children and families affected by this deadly disease. This year’s Ride for Kids® comes to the Baltimore/Washington area on September 23 and Bob’s BMW is extending a personal invite to come on out and help us set fundraising records!

Hundreds of motorcyclists on all brands gather for a police escorted ride, in which “local stars” (local children the foundation has helped) get to enjoy a VIP ride along. As a rider, the more money you raise the more premiums like cool hats, shirts, backpacks, and jackets, you will receive! (minimum of $35 ride entry fee).

For the past 18 years, Bob’s BMW has made it a top priority to support the cause and the annual Ride for Kids® event. Bob helps lead hundreds of motorcyclists in his 1994 Duetto sidecar, along with a “local star” named Paige who is a pediatric brain tumor survivor that has ridden with Bob for the past 4 years. Bob has participated in many fundraising initiatives throughout the years, but holds this one very near and dear to his heart. What Bob and so many others admire about this particular cause is the money you raise goes where it claims to go; and in this case, that is towards research and family support for those affected by pediatric brain tumors.

Last year, typical of most years, Bob attended three other Ride for Kids® events nationwide. This year in preparation of the 30 year anniversary Kings and Castles Tour scheduled in September, he was unable to attend other rides, however pushed hard all year long looking for ways and opportunities to raise money specifically for the Baltimore/Washington ride! 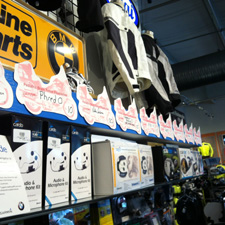 A donation bin has been available all year long by coffee for any visitor interested in supporting the cause and as the date gets closer, the dealership recognizes donors of $5 or more. Your name and donation total is posted to the wall behind the counter on a special Ride for Kids Motorcycle shaped cut out. This is going on now so stop by anytime!

For those able to spare a few more dollars and/or are looking for a little more instant gratification on top of doing a good deed, Bob has select motorcycles available which ALL proceeds will go to the Ride for Kids. One of the bikes this year is a BRAND NEW (6 miles) 2010 Honda Sabre. Also included in this elite group where proceeds go to the foundation are a 1997 BMW Ural Sidecar Rig, 2009 Honda ST1300 ABS, 1985 BMW K100RS with Pichler, and a 2001 BMW R100RTP.

The day of the ride, September 23 you can meet at Bob’s bright and early and ride to Turf Valley Resort for early registration to secure a spot close to the front…no one likes to be stuck in the middle of the pack! Especially a pack with hundreds of riders!

There are many ways to get involved and we hope you take a moment to do so: