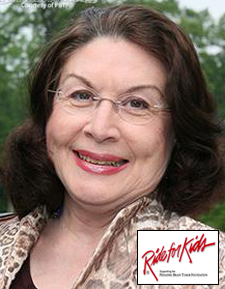 On July 20, 2012 Ride for Kids President and Co-Founder, Dianne Traynor passed away at age 67 after a long illness. Dianne Traynor helped to establish what has grown to be the world’s largest philanthropic organization, The Pediatric Brain Tumor Foundation, dedicated to curing the deadliest form of childhood cancer, and is a charity near and dear to Bob’s BMW and countless others.

It was because of Mrs. Traynor and her late husband, Mike Traynor’s hard work and dedication that for the past 18 years Bob’s BMW has had the gratification of actively participating to help raise hundreds of thousands of dollars to go towards research of this deadly childhood disease.

Mrs. Traynor grew up in Atlanta and attended the University of Georgia. After working as a teacher and accountant for many years and overcoming a personal struggle with breast cancer in the 80’s, she and her husband began the Ride for Kids program in 1984; a program which eventually evolved into the Pediatric Brain Tumor Foundation.

The accomplishments and achievements of Mrs. Traynor are countless as is the impact the Foundation has had on so many lives. A life that Mrs. Traynor and her efforts touched and one that Bob’s BMW is very familiar with is a young lady by the name of Paige. Paige is a pediatric brain tumor survivor. She joins Bob in his sidecar year after year to raise money for the foundation that helped save her life. Just last year she and Bob rode for the Baltimore/Washington area’s 20th Ride for Kids and helped to raise over $200,000.

The local ride this year is scheduled for Sunday September 23 and will certainly be a very special ride for many as we use the day to not only raise money for childhood brain tumor research but as we pay tribute to the co-founder of this amazing foundation.

Anyone interested in making a donation in Dianne’s memory can do so at www.curethekids.org