July has brought Maryland some record breaking temperatures. The month also seems to be bringing Bob’s some record breaking numbers. Our facebook fan page hit 1,000 fans this month and continues climbing! Thanks to all of our fans for supporting our page and keeping it interesting with great posts and pics! 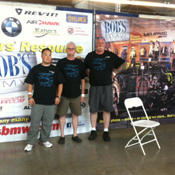 The beginning of July was your typical July at Bob’s BMW…rally mode! Last year, we had the pleasure of the rally being just one state away. This year the rally was held in Missouri so we had to coordinate setup from thousands of miles away. But anyone who knows Bob knows, despite the rally’s location, Bob’s BMW doesn’t miss a national rally! Especially BMWMOA’s 40th year anniversary which was also a very special year for Bob’s BMW…celebrating our 30th year in business!

We sent our worker bees out there including Bob and they safely returned last week! A special thanks to James Abrashoff, Fred Oppido, Mike Donegan, and our many rally partners that made it a great success! A complete list of all 2012 MOA national rally door prize winners plus the 30 GRAND PRIZE winners will soon be announced.

We switched up our last tech session and focused on the technical side of apparel. Apparel Manager, Peter Meade led the seminar sharing valuable information with the group on why we carry what we do and how it works.

Next month on August 11, Bob will lead the session, “What is a Project Bike?” We buy these project bikes and store them for the off-season but why? Next month you can hear the answer to this question plus learn the many rewards and joys these bikes bring to their owners. 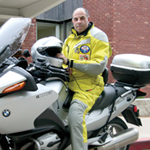 Local club BMWBMW is hosting its monthly club meeting on Bob’s showroom floor on August 11. Anyone interested in getting involved with the local BMW club and having some fun should be sure to arrive by 11 for the club’s meeting. The club will be here discussing current business as well as answering any questions prospective members may have about the club: what they do, how you can sign up, the benefits of being a member, and more. After the club meeting, folks are encouraged to stick around for our August tech session, “What is a Project Bike?” 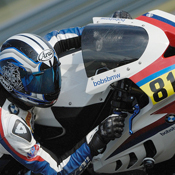 Bob’s sponsored S1000RR rider, Jeremy Cook is well into the 2012 season and really showing up for his first year racing in the expert pro division. We are proud to report, Jeremy has remained in the top 10 for all 29 races except for one “did not finish” (DNF) which he “did not start” to finish! Long story short, race time was changed and announced at the last minute and he was unable to get ready in time.

Jeremy races with CCS up and down the East coast representing Bob’s BMW and the BMW S1000RR. His home turf is Summit Point Race Track in West Virginia. Anyone interested in spending a day at the track can join Jeremy and his crew under the Bob’s hospitality tent at his next home race on August 25-26. We send Jeremy with a hospitality tent and complimentary beverages and snacks to accommodate fans. If you have not been, we encourage you to go and check it out. The tent offers a shaded area to rest and kick tires with fellow riders while getting an up close and personal view of the races.

On July 28 Bob’s hosted an Edelweiss Bike Travel informational session led by Rainer Buck, the Managing Director of Edelweiss. Questions including how to prepare for international travel, what types of tours are available, how to choose the right tour for you, and more were answered. Attendees learned the difference between traveling hairpin turns in the Alps versus a more open road adventure through South Africa.

In addition to this information, Rainer also provided details on Bob’s upcoming anniversary trip to Eastern Europe in September; which there are still spaces available for. Anyone interested in joining Bob and Suzanne on this 15 day motorcycle adventure through Eastern Europe, can contact Bob directly.

More information on the Kings and Castle Tour is available at https://www.bobsbmw.com/road-crew/events-and-rides