For the Lucky Few Who Travel By Motorcycle 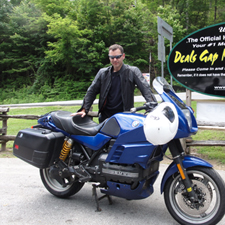 Yermo Lamers is a long time customer of Bob’s. He is a behind the scenes kind of guy, a software engineer, that has combined his skills and passion to create a fun and exciting motorcycling blog known as Miles-by-Motorcycle. Here Yermo documents his personal motorcycling adventures and encourages his readers—followers of all backgrounds riding all brands—to do the same!

Back in 1992, in preparation for a trip to the Arctic Circle, Yermo bought his very first BMW, a brand new 1992 Royal Blue K100RS from Bob’s. Unfortunately during this trip Yermo got sick and had to cut it short. Finally, in 2010 another opportunity presented itself and he was able to depart for what turned out to be a 15,647 mile adventure past the Arctic Circle, all the way up to Prudhoe Bay and back following a circuitous route…riding the same 1992 K100RS he purchased for the original trip 18 years ago, only now with 53,151 miles on it! And one of the coolest parts is Yermo stopped by Bob’s BMW on his way out and checked back in when he returned 77 days later! Bob’s BMW loves sharing our customer’s adventures, so we’re thrilled!

When telling people about his upcoming trip on Dalton Highway, an unpaved road often referred to as the loneliest road in the USA, friends and family insisted that he text, email, or contact them some way every day. One friend suggested he write a blog which is how Miles-by-Motorcycle began!

Yermo figured the blog would save him a lot of time, rather than individually contacting each and every person so the blog began and within 2 weeks he had an international following!

From seeing the blog’s success in such a short time, during his travels, Yermo decided upon his return, he would use the blog as the start to a full website targeting “the lucky few who travel by motorcycle.”

Yermo has never considered himself a writer but ever since the site and blog have been live to the public, he has received such great feedback and praise he has decided to take it another step and turn the blog into a book. The book is in the works and Bob’s plans on inviting Yermo to host a book signing as soon as it is done…stay tuned!

Motorcycling is meant to be fun and if anyone knows this it is BMW riders! Just like Darryl and Lex in the previous story above, Yermo rides his BMW as it’s meant to be and trusts the BMW brand. Yermo said it best when he stated, “I will ride my K100RS until it is no longer feasible to keep it running which, given it’s a BMW is likely going to be a very long time yet!”

Bob’s encourages you to check out Yermo’s blog. His stories are always interesting and he keeps the blog up-to-date! One of his latest entries was a report on Bob’s Track Day that he attended and a recent trip to Deal’s Gap. You can also LIKE his Facebook Fan Page to hear great motorcycling adventures.