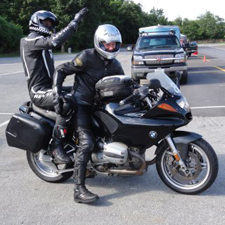 When you close your eyes and visualize all the fun and excitement had at Bob’s annual Track Day, you probably envision supped up bikes going fast around turns and sport bikes passing one another at red line speeds. You probably don’t envision 2 grown men in full leathers riding 2-up on a R1100S like you see in the image to the left! I know it’s hard to believe, but what you see here folks are 2 hardcore BMW motorcycle enthusiasts!

Lex, driving and Darryl, riding passenger are both your definition BMW riders: everyday, despite rain, sleet, snow or excessive heat, these men ride…not typically together…usually each on their own BMW! But even in this case, having to ride 2-up didn’t stop them.

So why in the world is Darryl on the back of Lex’s 2000 R1100S at Track day you ask? Because after 12 years of commuting from D.C. to Jessup 5 days a week, despite weather conditions, putting over 90k miles on his own 2000 R1100S, and after 6 plus track days running up to 140mph, Darryl’s bike decided it was time for a break. Darryl rode from D.C. to West Virginia that morning for Bob’s annual Track Day, made it out for his first lap around the track and noticed the bike began stuttering so he did what he thought best and pulled in the clutch. It was at this point that everything stopped, smoke began coming out of the rear and it was clear, this beast of a machine was finally throwing in the towel…the engine had died.

How many motorcyclists can say they have put 90k plus hard miles on their motorcycle, let alone, one just 12 years old?! This BMW rider can. This was Darryl’s A to Z bike. If he needed to get somewhere or wanted to have some fun on the track, this was his go to. So many riders out there are lucky to put 15k miles on a bike in their lifetime and even then most of those miles are casual cruising miles accumulated a handful of times each year.

Motorcycles are engineered to be ridden and ridden to the max and Darryl and his BMW prove this! It was a sad day on June 16 when Darryl found himself watching from trackside and having to ride home passenger on the same year, make, and model bike he rode in on which was being loaded into the Bob’s trailer at the end of the day.

Darryl explained, “I got the bike to ride and to have fun on and I did. I think the amount of miles I put on it and knowing how hard I ran that bike prove that. If you aren’t riding your bike to its fullest capacity, what’s the point? BMW’s are dependable, reliable, comfortable, and run flawlessly when taken care of properly just as mine did for the past 12 years. I put it to the test and it passed with flying colors!”